So, because the Quest System is so big, I decided to play with something a little easier and decided to add in the Beast Book: 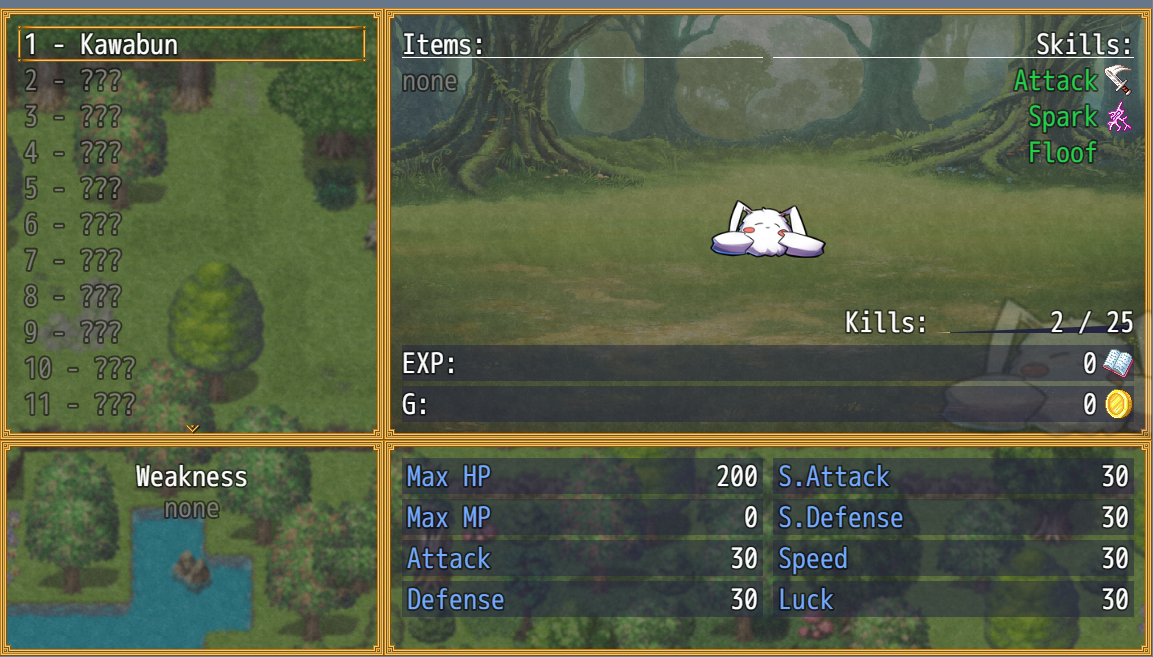 Yep. Kawabun has no weakness set right now. And actually…wait…ugh…those stats are from the database and relate in no way to the base parameters set via a class….ugh. Ugh. Okay so that’s going to be harder than I imagined. Maybe just don’t show stats?…considering things have levels…

And with some edits to the Plugin and some mucking around because of a plugin incompatibility….I give you the Beast Book! 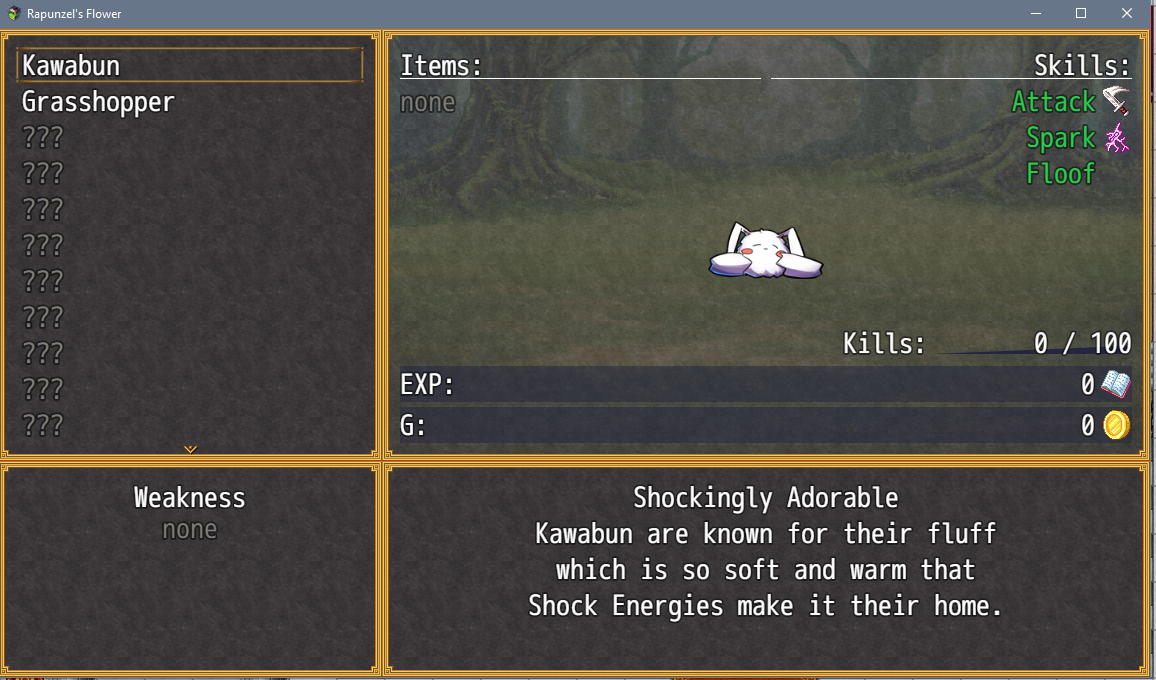 BACK TO THE QUEST SYSTEM

Okay, I know this screen doesn’t look like much, but with that help description on the top that means I’m setting my variables right and they are being transferred over correctly. It also lets me know I need to find a different layout for this CE Menu 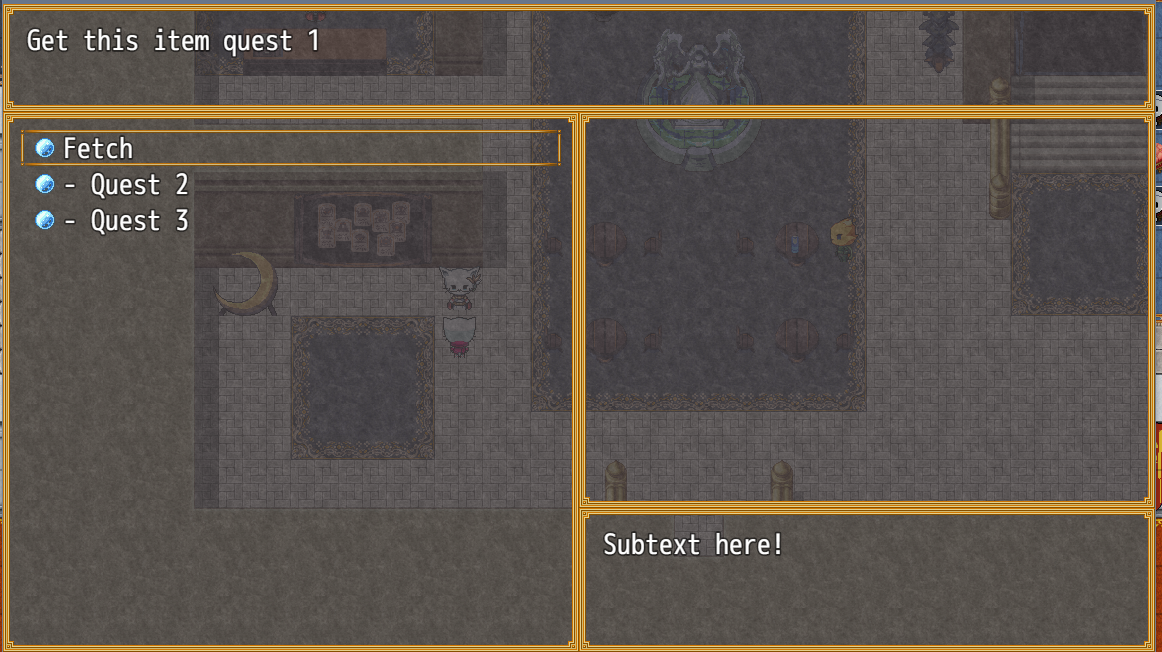 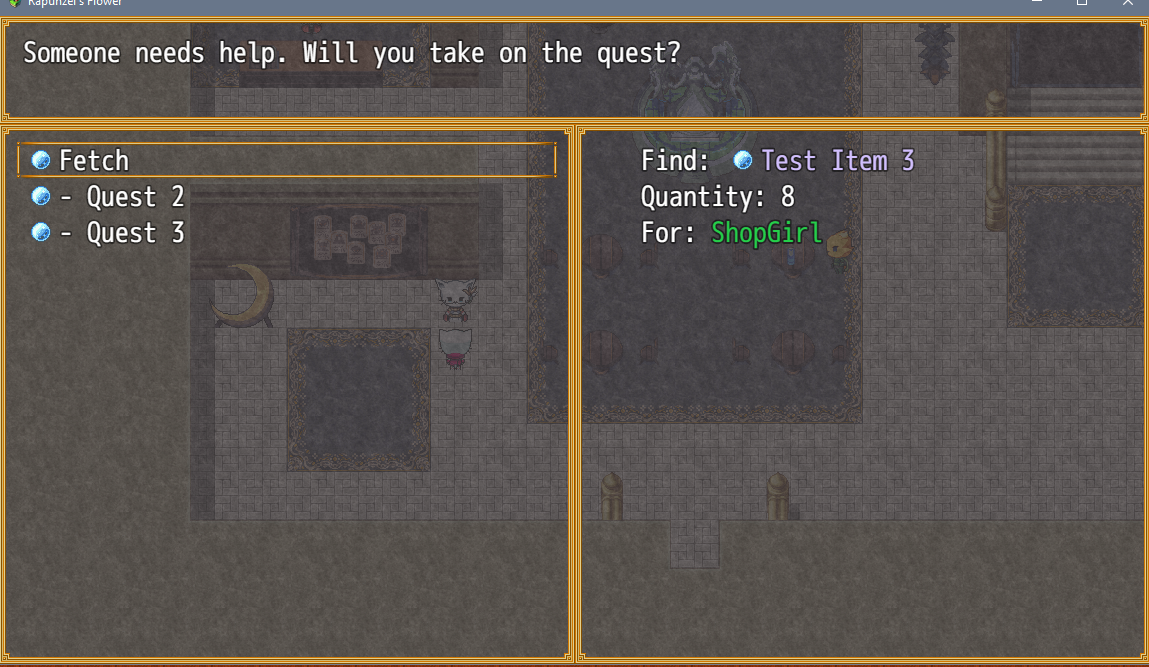 So I couldn’t set variables that used text codes to become the descriptions so I had to set a conditional to see what type of quest it is to be able to make the quest: 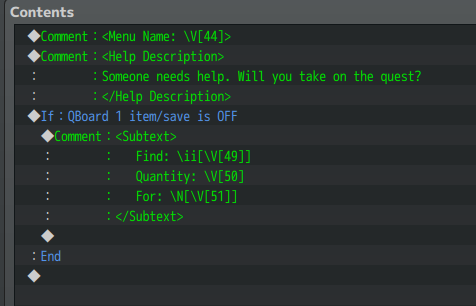 So depending if it’s an item or a save quest will determine the layout.

And changing the menu layout again and adjusting heights, then throwing in a bust picture as an example we get: 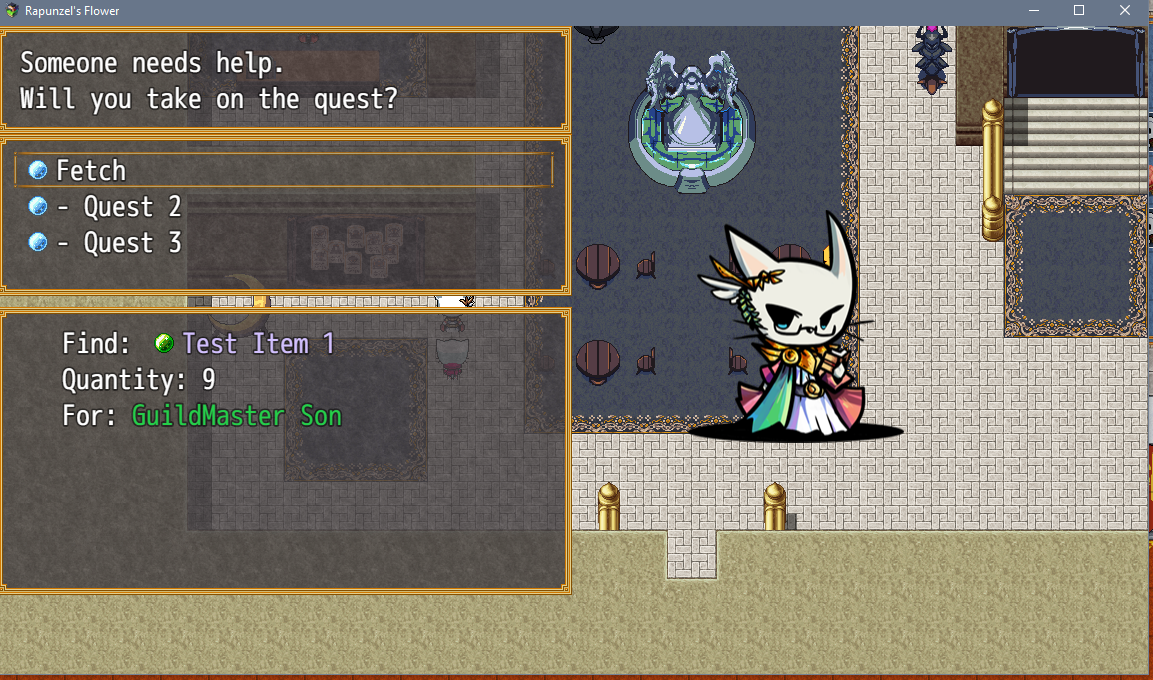 I don’t think I could easily add the quest askers face to the subtext but I may be able to make an icon version of them that I can put in front of their name.

Now I just have to copy/change the code to the other Quest slots.

Now, selecting one of the options doesn’t do anything right now, but soon it will take the information in its variables and deliver it into the players Active Quests.

I also have to do a check to make sure it overwrites an empty quest slot the player has.

This is why I’m only working with three quests at a time…really a player shouldn’t be focused on more side quests than that, and being this is actually an optional feature for non-story line stuff, then yeah. 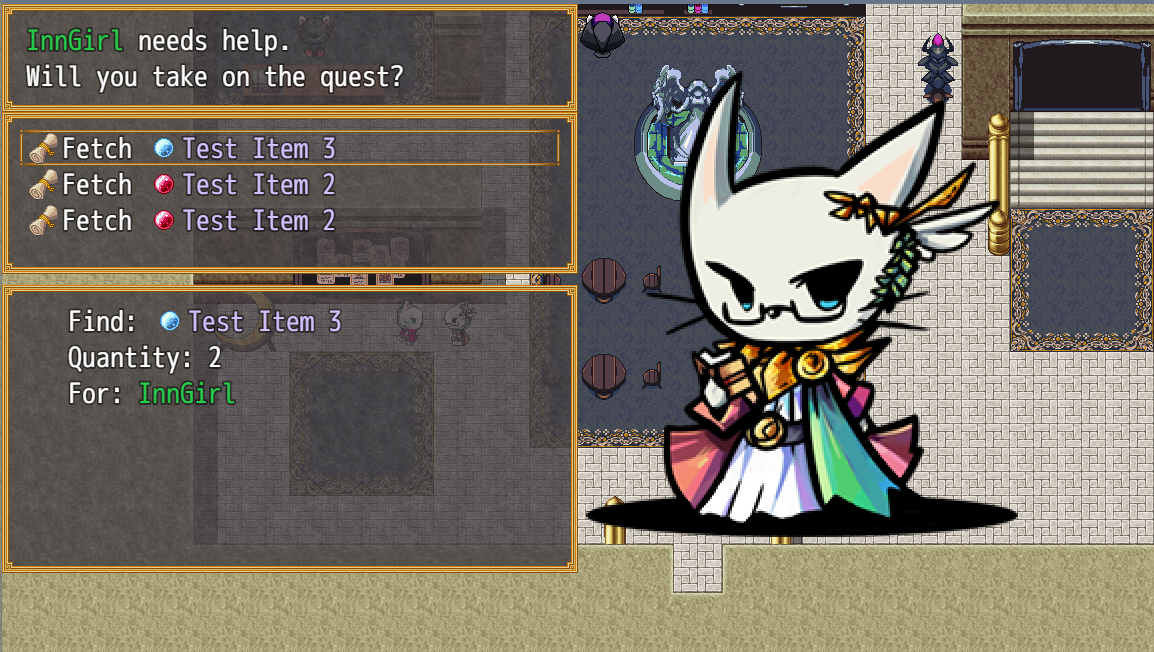 Trying to keep the text entertaining do to lack of pictures, and lack of me wanting to spend time making those icons I mentioned…tho I should.

Okay, testing and building the system in the Common Event for Quest 1, this is what I have so far when you select a quest: 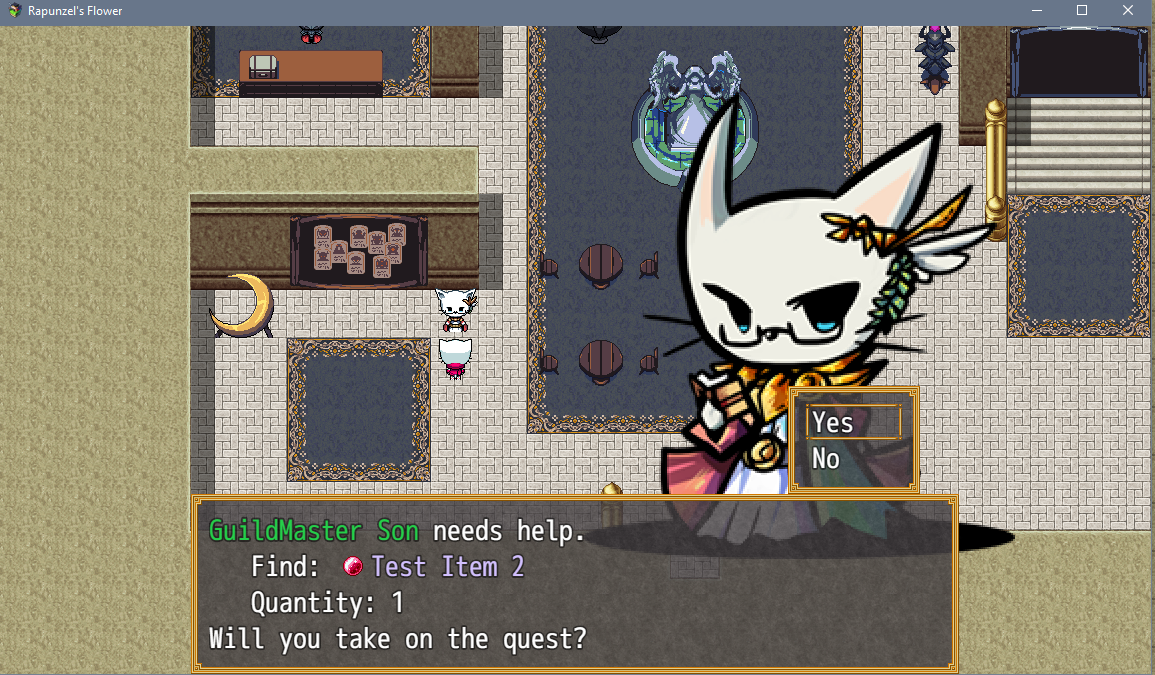 I was hoping I’d be able to finish the quest board system and then talk about what I did, as trying to write this as I tested it would have interrupted my work and how I focus. Overall, when I did get bugs in the system it was mostly what I consider typos, but rather it was I set something to the wrong variable. The code structure worked, I had just set one or two things to the wrong variable witch changed things, or I had my variables setting correctly, but the text  for the messages was pulling information from the wrong variable.

I did have one interesting bug where a quest would say the Player had requested it, which shouldn’t be possible. And I checked my code. When setting the asking NPC it should have never set to actor 1. Which pretty much ended up meaning the problem was in my ‘erase quest’ event where I would reset an event. And sure enough, I had it when you reset Quest 1 it would change the asking NPC of Quest 3 to 1. Weirdly specific but that’s an example of my code structure being right, but calling the wrong variable messed it up.

And I did get the quest menus working! There are still some more things I’d like to do, such a program it to where the quest board doesn’t reset every quest each time you talk to the Quest Master, but rather every 2nd or 5th time you do it has a chance for each quest to change. However, the quest menu will randomly generate quests, you can select a quest and add it to your Active Quests menu, you can open your Active Quests menu from the Main Menu where you can then select a quest and be asked if you want to quit it, which will then delete the quest. All of this works, and the order you add/delete quests to your Active Quests doesn’t brake anything (such as fixing that deleting Quest 1 broke Quest 3).