Believe it or not, Reel Dream, a crazy fishing RPG, is actually my main project; despite all the attention Rapuznel’s Flower has been getting.

And honestly, this project feels like it’s going the way of other projects: I bit off more than I can chew and it’s not going to work.

However, despite this feeling, things are ‘working’ or at least workable, and I’m sure I can bring this to a completed project.

I want to complete it.

Reel Dream is a fishing RPG. It’s a Harvest Moon -style game where instead of growing crops to cook food, you’re catching fish to cook.

And the oddest part: you engage in a turn-based rpg battle to to try and catch a fish.

I’ve been working on this project since…March?

Originally, I had a longer story about your aging grandfather who can no longer go out fishing and asks you to catch fish and cook him all these wonderful fish dishes that he remembered from his youth. Your grandfather would then tell you some tall tale, like meeting Bigfoot, that you would then realize was true as you too meet Bigfoot on your adventure around local lakes, rivers, etc to catch fish. 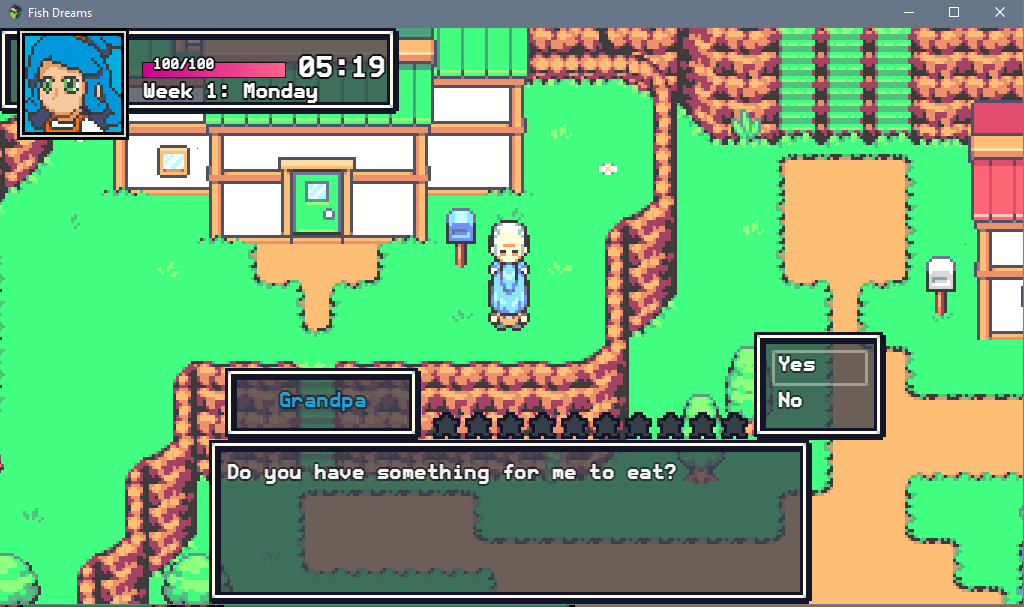 Then the project got to be a bit too big, as well as awkward with this rpg style system, that I thought people wouldn’t like it, and didn’t want to waste my time making a long game that people really wouldn’t like (even if I did). So, I came up with a smaller story, and decided that I would release a tech demo of sorts to see if people liked the concept, and from that feedback I would decide if I wanted to make the short, or long story.

There’s no point now in telling you what the short story version was, as that idea eventually got thrown out the window as the tech demo took longer and longer to make, and I got stuck trying to balance the game without having a game world to put the mechanics in.

So, having spent so much time, I just said ‘forget it, I’m doing the main story!’. So Grandpa’s story is the one I’m going with, but perhaps the scope of the game a bit smaller.

You’ll still meet Bigfoot though. I’m sure my Bro-in-Law would love that. He’s part of the reason Reel Dream exists anywho.

There have been people who have enjoyed this concept from the beginning, and they are part of the reason I still press forward with this game, even though my own enthusiasm for it has pretty much died. Which honestly, any long term project will have it’s ups and downs, so I’m just fighting through a down right now.

I think one thing that makes Reel Dream difficult to make is the amount of customization that is needed to make the ideas work. I was blessed enough that someone made just the right plugin for an ingredient based cooking system as I was working on this, as all other options didn’t quite give that Harvest Moon -style cooking I had wanted until it’s release. 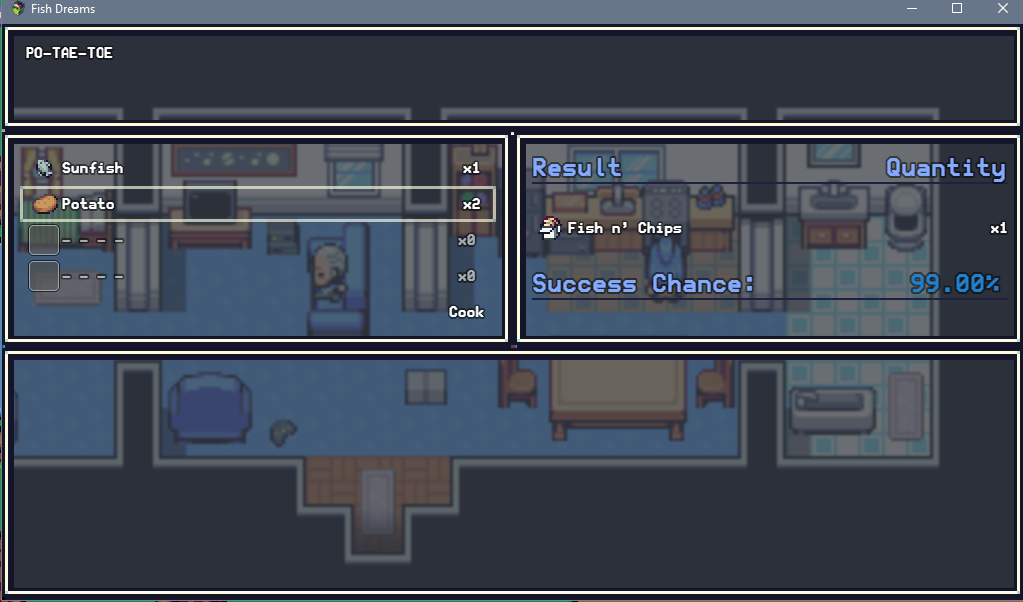 Then there’s the entire battle system. Despite being a turn based system, it’s not a standard battle you’d see in generic RPGs. There’s a completely different logic behind the fishing battles, where, as of now, you actually use items, lures, to ‘attack’ the fish and bring down their

‘Hp’ which is actually more of a lure meter, whereas you have to watch out that your ‘hp’ or line tension bar doesn’t get filled, or else you loose the fish: 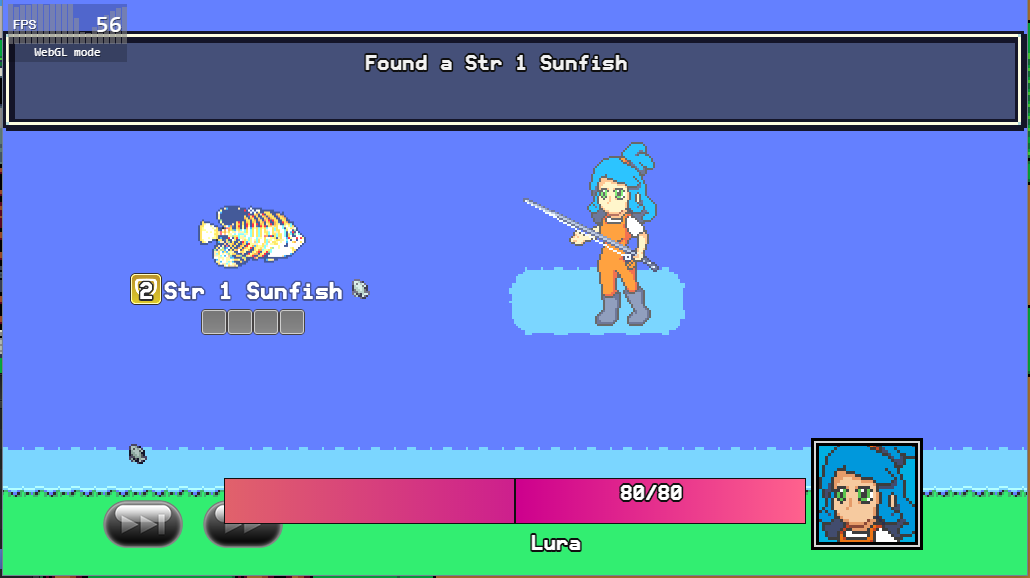 The battle mechanics have changed quite a bit, and from this screenshot you can see that the UI is still a major work in progress. I actually have to update my Luna Engine plugin to fix some potential bugs and…It’s just a lot of elements to juggle.

Then there is the game balancing. Which isn’t my strong point and is why I work hard to make sure things are as balanced as I can get.

Except this is harder than my first game Well Yu, where I only had to balance player/enemy moves, and make sure my few items were dispersed evenly in the tiny game world.

In Reel Dream, there are a LOT of interconnected systems that need balanced. From the battle system to the foraging for items to make sure you can get the right ingredients for the dishes you need to cook, but not have too many that make the game too easy. Then making sure the player has access to items to craft lures and make sure there aren’t too many or too little to progress.

Shops have to be balanced to have the right items, and the right prices. Items and fish have to be sold at appropriate prices to make sure the game isn’t too easy by making too much money, and not too hard by having too much.

But not only do I have to balance that but I have to make sure all these resources are appropriately spread across a game world for foraging and the day/night system. The player has to be able to adventure for an entire game day and get far enough to make the day worth it, but not far enough that they cross the entire game world, as I want it to take about two-three game days to get from the Hometown to the Big City (which has a Town in between, woods, mountain etc) 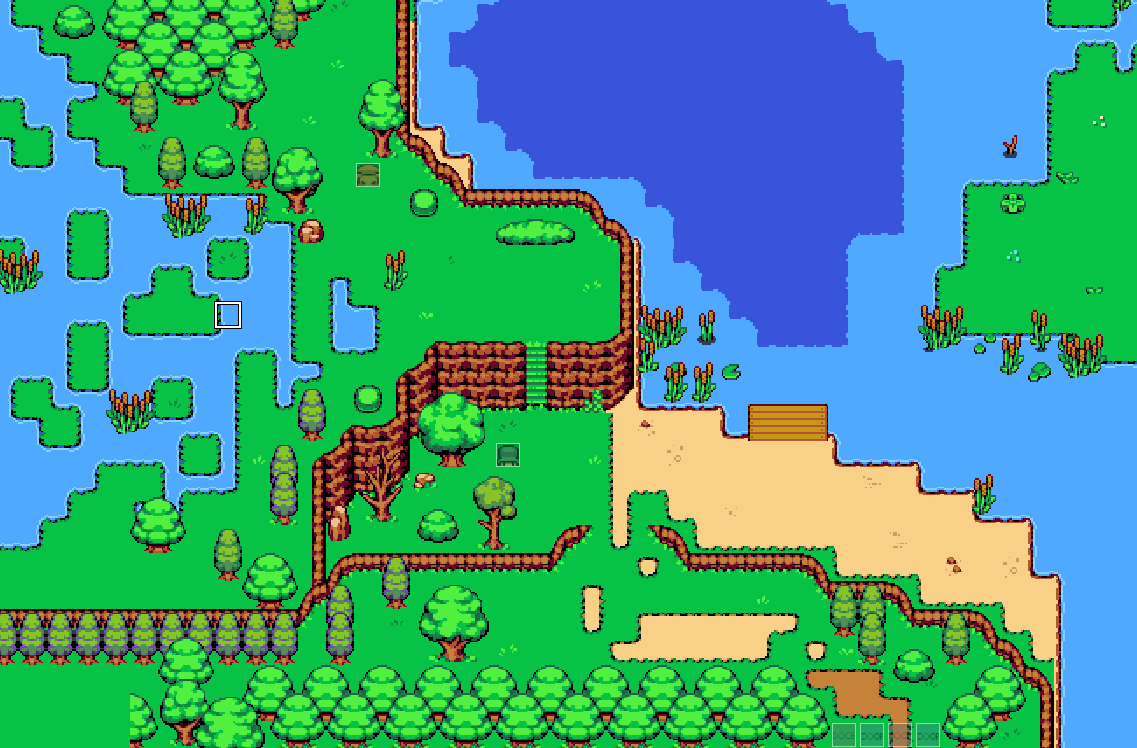 It’s given me a good break from all the mechanics work, as now I can better visualize this world I want to make.

I guess all this game balancing and all these systems that have to work together is just daunting for me. I didn’t expect this to be such a hard thing to pull off, however it’s not the first time I started a project that I dropped after getting it’s fancy mechanic systems to mostly work.

Then again, I don’t plan to drop this project.

I do need to change things though. Remember Irina’s Card Game plugin? Yeah, I got on that bandwagon and was going to use collectible cards to give fish stats and…I’m dropping that and going back to a simpler Beast Book style plugin. The Card plugin needed way too much customization and honestly didn’t perform well on my computer and I don’t want to create a game that doesn’t run well on my computer. The Beast Book style will be simpler to set up and will still serve the same purpose of showing fish stats to the player.

Simplifying the game back to its original ideas like this will make my job with Reel Dream easier. It will still have fishing, cooking and now lure crafting. It still has a friendship system and I do still plan to make custom artwork for characters.

It’s going to take a long time for Reel Dream to be made a reality, but for those of you who know of this project, I just want to thank you for your support. I wanted to give you a Dev Log, that way you know this really is a project I’m committed to. I may be doing the weekly dev logs of Rapuznel’s Flower, which yes is easier to make than this game, but I am making this game. It’s a slow process, but I will get a tech demo out, I will complete this game.

I just don’t know when.

I could go on and on of the issues I have with Reel Dream that make it a hard project to work on, but none of those issues are impossible. They are just time consuming and yes, boring at times.

Reel Dream will happen. Don’t get discouraged if Rapunzel’s Flower shoots ahead and gets released first. RF is an easier to make game with a simpler premise. It’s meant to be something that shoots ahead.

Reel Dream is unique for an RPG, which is why it is taking so long and has so many hiccups.

I mean, really….how many RPGs do you know where you battle and catch fish in a turn based RPG style?

Again, thanks for all your consistent support. It’s great to know there are people who want this crazy fishing rpg.

Love you all and God bless,
Meike Kima