First off I want to apologize for not being consistent with updating the website. Patreon had been updated appropriately, and it’s posts are set to go public a week after I post, so I have to get the website caught up. I’m probably going to spam ya’ll with a number of posts then! I may be 2-4 posts behind! I have to check.

Sorry I tend to come back in the mornings (It’s Sept 4th BTW) and say ‘I did stuff last night that I didn’t write as I go!’ but I’m sure ya’ll are used to it by now.

Last night was a lot of mapping. Cleaning up the details on the Forest area, moving back to the capital to work on building interiors.

I ended up working on the interiors of three different buildings: the Blacksmith, the Inn and the Windmill.

One thing that I did different, that I will probably get complaints about really, is that I found that the Aekashics tilesets I had had tiles for the Blacksmith: 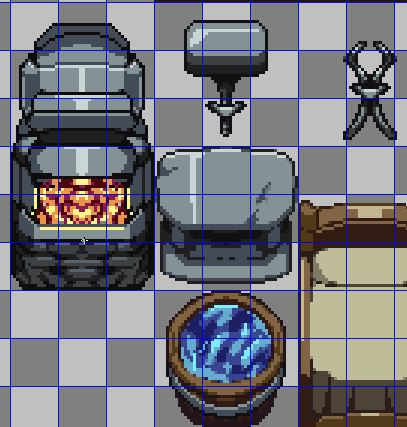 Which would match the Blacksmith cat a whole lot better than RTP (or PandaMaru) Blacksmith Tiles.

But Aekashics tilesets can really clash with the RTP, like you really got to be careful when mixing them. Even when you are it’s obvious they’re different from things.

So I decided to use Aekashics solely for the interiors for the Capital. An inconsistency that I made consistent by making players able to expect these stylized tiles on the interiors of the capital: 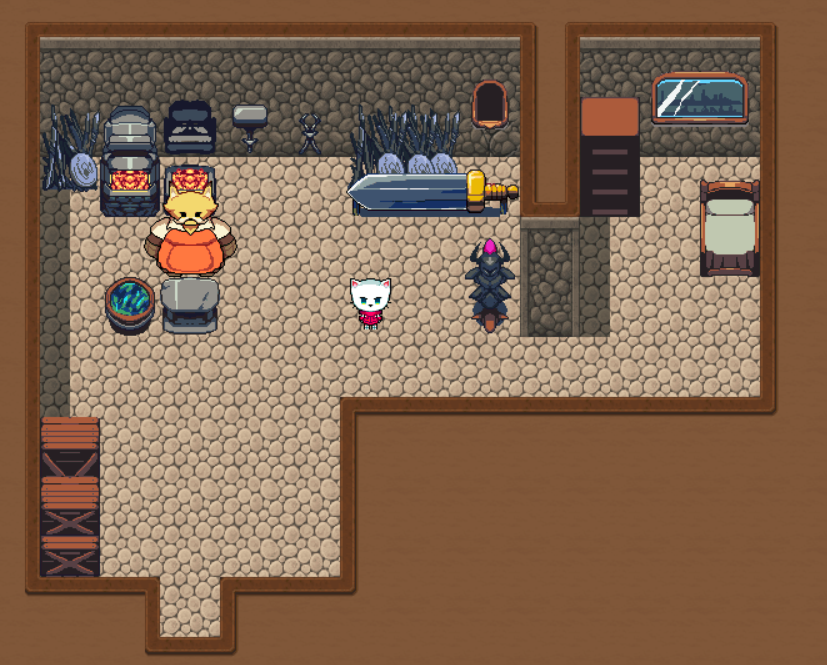 When making these interiors I took into account the shape of the house from the outside: 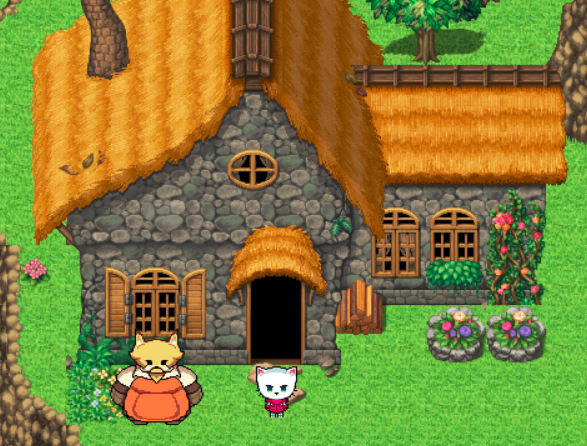 That way there’s some consistency…actually, writing this out I see that the door should probably be moved…

And I just now moved the door! 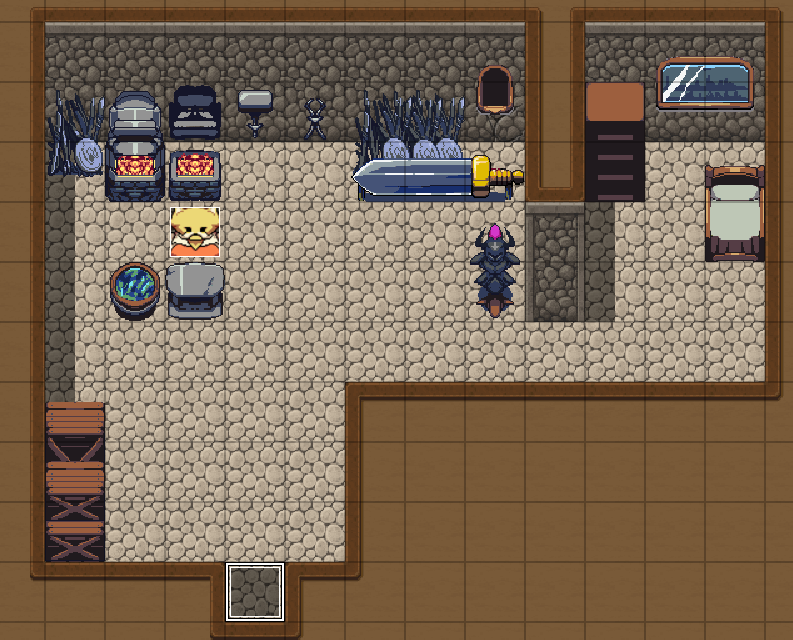 Anywho, back to what I worked on last night. After the Blacksmith I went to work on the Inn. Now at first I’m a lazy mapper so I loaded a sample map: 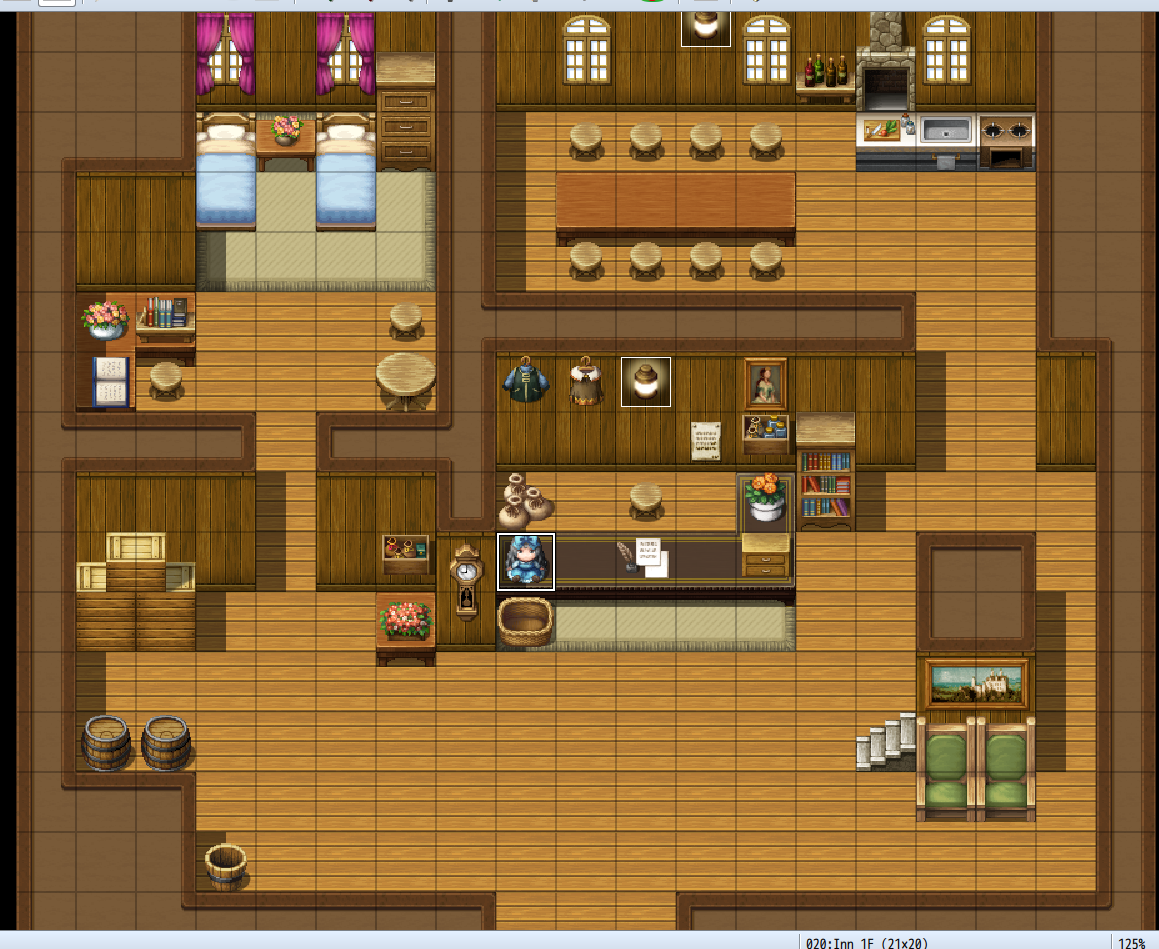 Of course, I don’t leave things as is. There are a lot of decorations there that I just don’t like, and clashes with what I want. Plus I had already determined that I was going to use Aekashics tilesets for the interior decorations.

I actually ended up working on the Inn for a good amount of time, and it totally changed by the time I was done. I had to take the shape of the outside into account, as well as keep consistent in the style I started, which is basically that the rooms aren’t surrounded by black, but rather the wall tops: 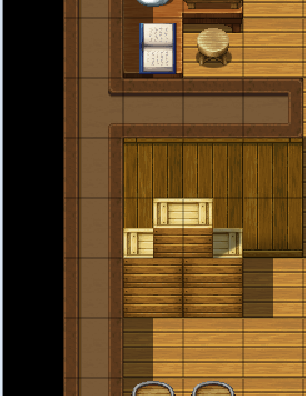 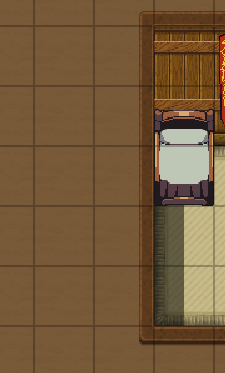 It makes more since in game…

So as mentioned, I took into account the shape of the outside of the building, and using Aekashics interior tiles the Inn turned into this: 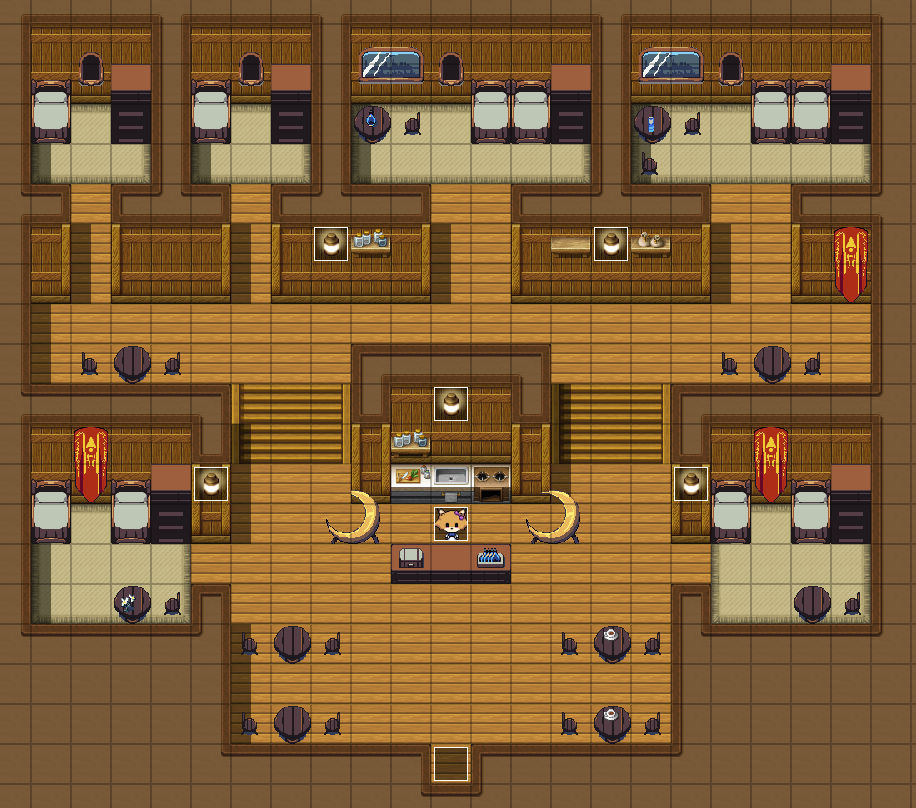 The little moon shapes were cute, so I decided the Inn was called the Crescent Inn.

Those stairs really help add to the space with the second level. It feels great in game.

My main quip is that all the beds are the same, and I don’t have a double bed. If I feel like it I may try editing the bed to be a double bed, or play with some bedding colors, but for now it is what it is as the RTP beds completely clash with this one.

I also may turn one of those chairs into a stool.

I decided I’d use that banner as the Capital’s banner, and I actually have to fix the tileset for it used here, as I edited it for the outside/castle interior tilesets but didn’t update here. (yes, one Aekashics tile leaked to the outside! Just the banner.)

The last building I worked on was the Windmill, which if you remember is where the underground dungeon will be! I’ll hide from you where I hid the stairs 😉 (okay, it’s a crate object that when clicked turns into stairs that does nothing) Although it’s temporary as I don’t know how I’ll lock/unlock it in the future.

First though, I tried to see if the round ‘Mushroom House’ interior from the FSM would work: 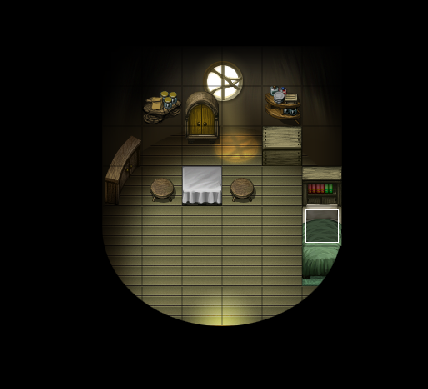 After playing with it…it didn’t. It just didn’t work. It clashed with the bright colors of the Aekashics tiles, I didn’t know how to put stairs I just….noped out of that one.

So I needed a round room, that was smaller sized. I found this sample map: 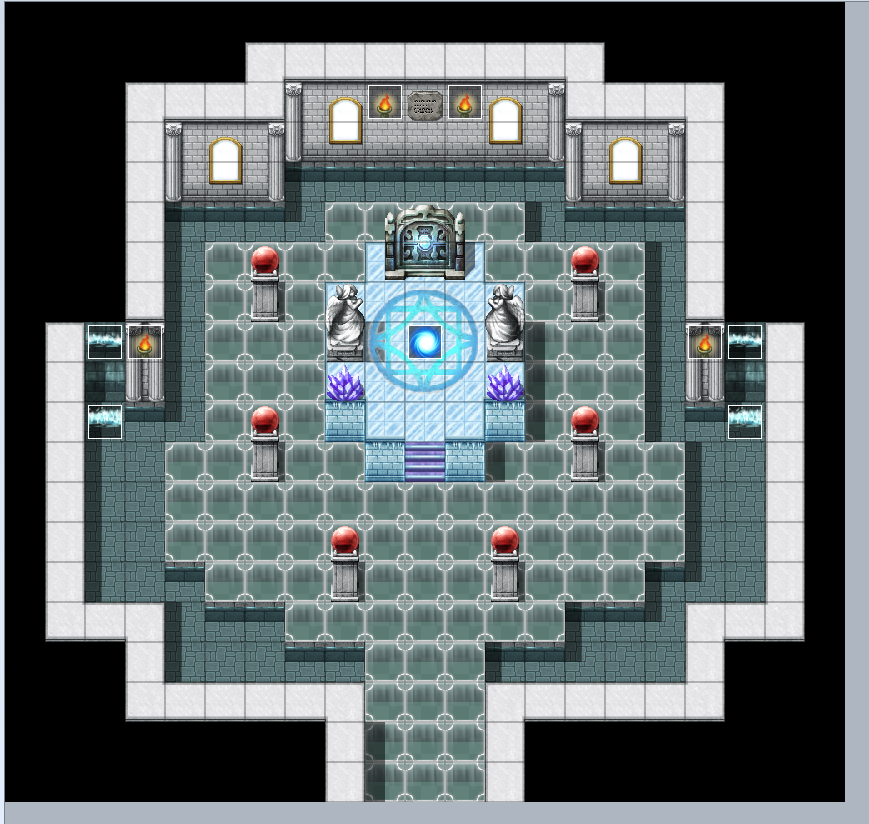 Obviously all I wanted was the shape and I ended up with this: 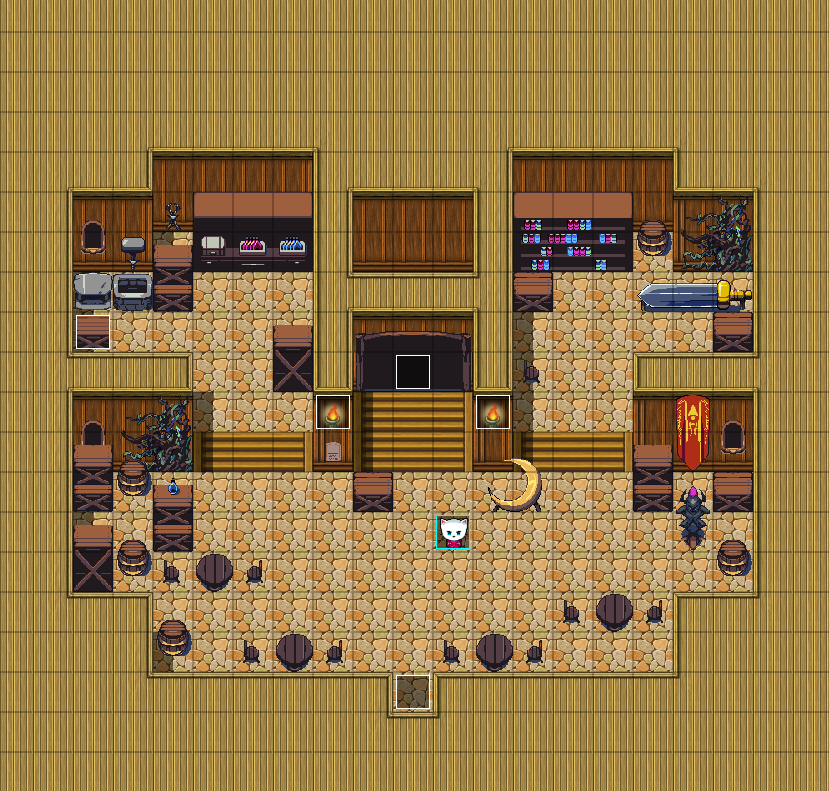 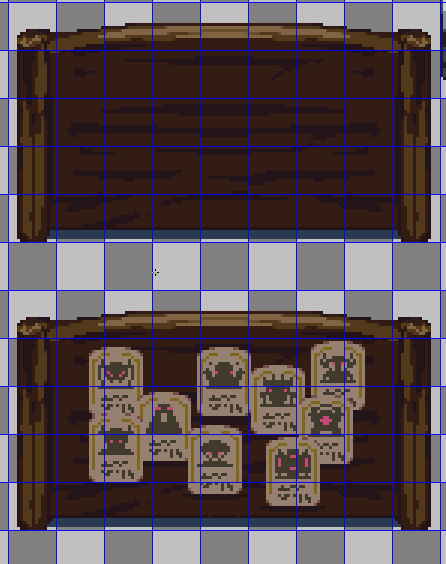 I’m probably going to still fix up the shape, but the idea is completly there. I figured the Capital was using the Windmill as kind of a storage space, as well as heroes turned it into kind of a hang out, so you have a little bit of everything.

What I’m most proud of is the staircase door. That’s actually an empty bulletin board, but it looks like a large opening.

This may kick my in the butt later as that bulletin board would be perfect in the Quest House. But it may just need some small edits later or something. We’ll see. 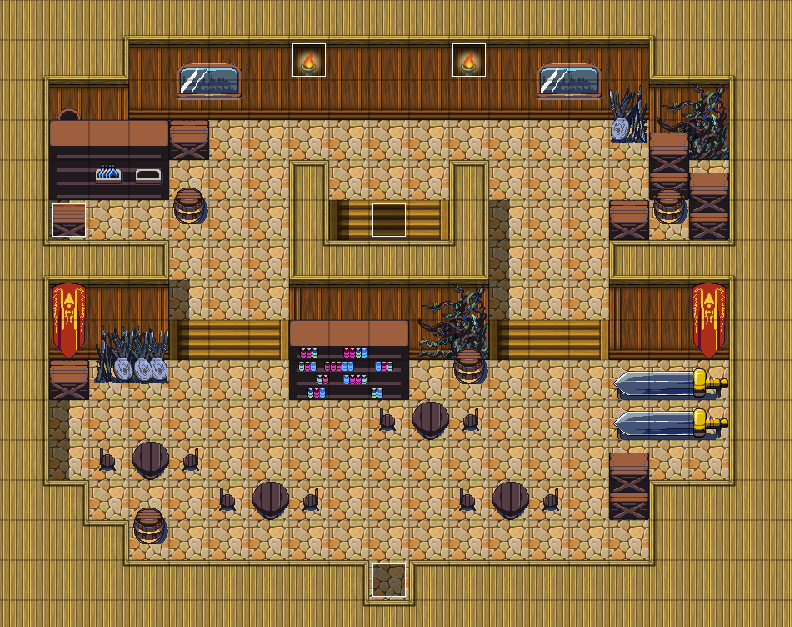 And that’s about it. I’ll probably tweak the shap to make it more round, as well as make the second floor smaller than the first, but that’s what I did last night.

For those banners on the outside, I did some edits to give them a wood bar they hang off of and I put them on the castle: 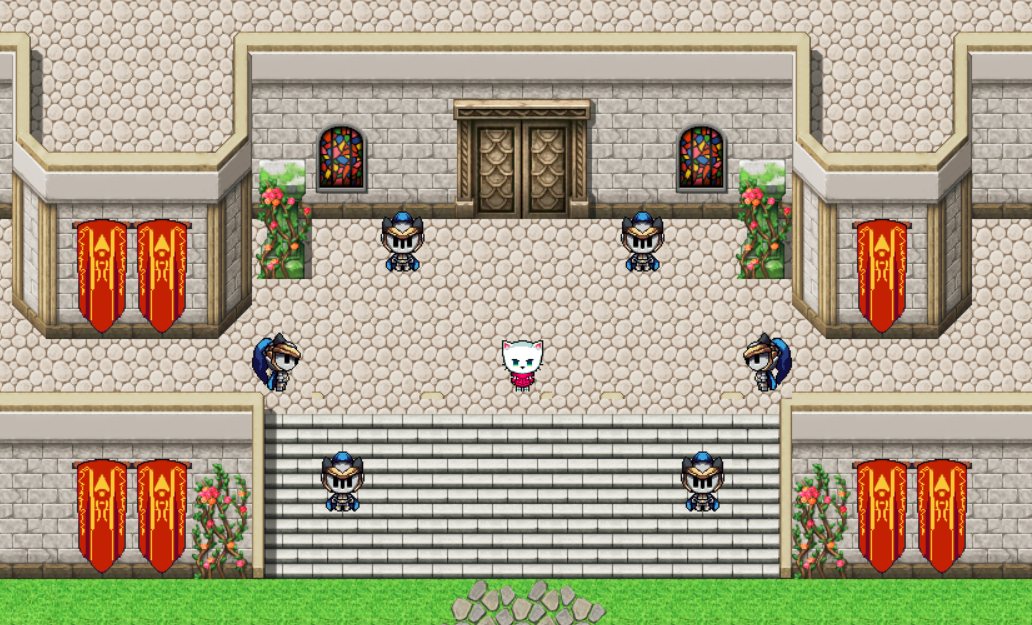 And that’s all that I got done last night! Now to go work on Reel Dream….

LOTS OF PICTURES :3 but honestly getting some mapping done was really fun!