So with the concept of Big HP/Damage and little Stat numbers, I’ve started to build my level up formulas: here we go:

By now I’m in a part of development where ya’ll would probably rather see what I’m doing than read, so by the time I get posting this stuff, I’ll probably get input on what ya’ll would like to hear.

Because this is a Dungeon Crawler, I want each cave to be able to be revisited and still be a challenge so I plan to use Enemy Levels. By the time you get to the post-game I want the player to unlock the difficulty slider that way they can play at any level they want and challenge themselves with harder enemies, or play through side quests easily. Perhaps in post-game they want to craft everything, so they set monsters to easy to make it easy to collect item drops. IDK, but that’s what we’re doing.

Here is my plugin list so far, I’ll say at least one of these (The Title Menu Position) is temperary, but here we go: 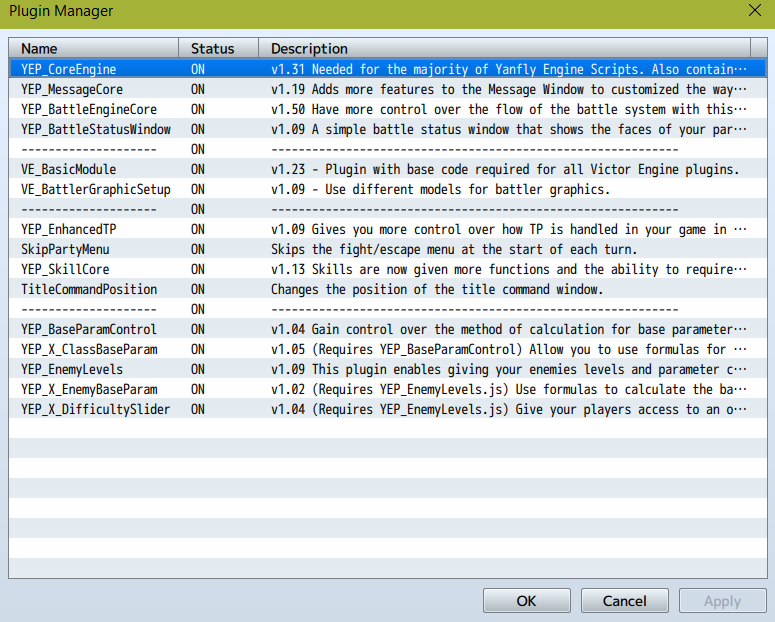 As you can see most of these are for the Battle System and mechanics. We’ll be using BaseParamControl and ClassBaseParams to make it easy to set up stat growth for the player’s characters, and for enemies: 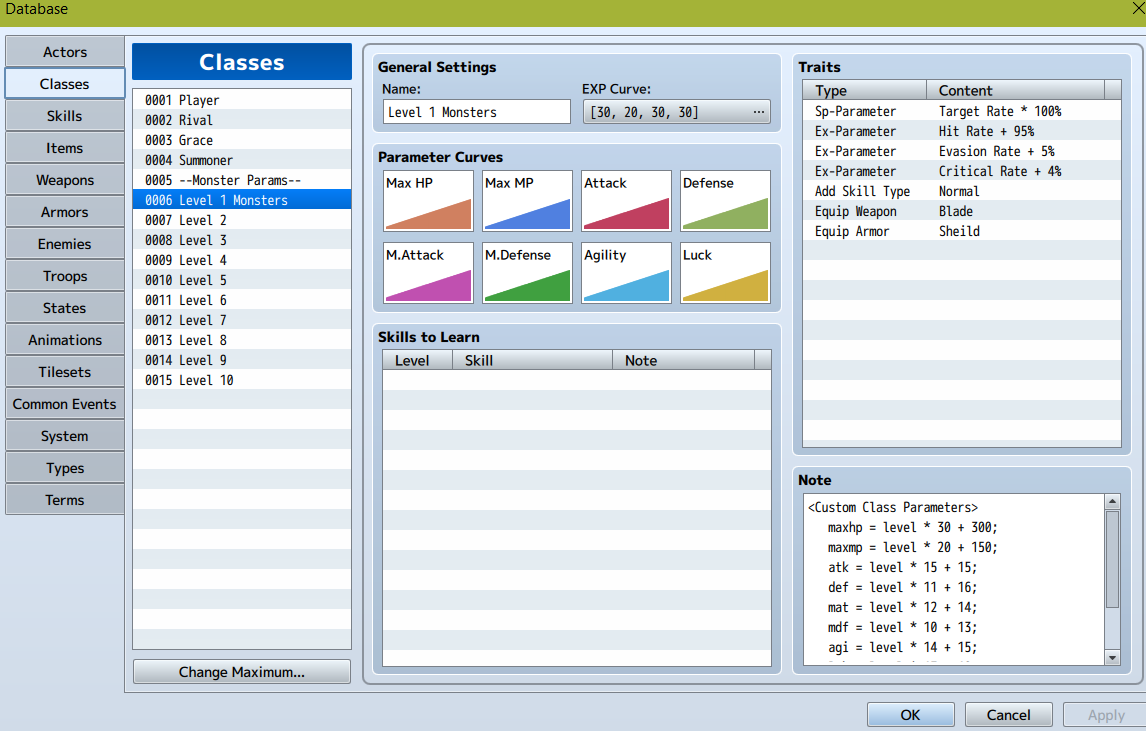 I’ll be using the Classes to determine the base parameter and level growth for everyone. As you can see there are Monster Levels, 1-10 for now, but I’m not sure if I’ll need all 10. I haven’t come up with the formula’s yet, I’ve just copy and pasted the example in the plugin instructions, but this will let me base our 30~ or so monsters on a sort of power level, and with Enemy Levels can set their min and max levels. Combined with the difficultly slider in the post game, this should be a good start for making sure everyone is balanced and that in the post-game players can play how they want.

Eventually what I’m going to do is try and think of what the level cap will be and what should be the target level to complete the story line. One of the reasons I’ve also done the Enemy Levels is so that people who do side quests won’t get too far ahead with grinding and make the game too easy. There will be level caps to enemies, so you can still work to surpass them, but hopefully it will make the storyline still be enough of a challenge for those who want to do some side quests because I’m planning to make the side quests all optional. You can play through with all Main Quests, or you can mix it up as you play. Thus, the Enemy Leveling. Those who don’t want to grind or explore the side quests can go straight through, and those who do want to explore and grind can do so, without automatically setting the Main Quest to too easy.

And yes, I’m trying to balance the levels and enemies without even giving much thought to skills. Skills just manipulate the numbers (I feel like I want numbers to be really big in the game, so I’ll be adding some 00s to the damage formulas. Perhaps, for my own entertainment’s sake, keep actual stats small, except for the HP, and make damage BIG. So an attack of 5 will actually make skills cause like 1000 damage or something XD hahaha). So before I can think about skills, I need at least a starting point for my numbers, then through playtesting we’ll balance the numbers.

So now this is where I will go back into the Google Sheet and create a new tab to figure out my numbers!

So, as I’m building my spreadsheet I’m realizing the way I have the 10 Enemy Level Classes set up does not really allow for an Enemie’s Stats to be higher or lower, so now I’m taking a look through my plugins and just brainstorming how to make sure I can have unique stats for a level one fire monster compared to a level one Shock monster.

Reviewing how the plugin works, I’m thinking I’ll fine tune the difficulty levels, and for each difficulty level make a class for each typing. The plugin allows me to mix and match stats even, so there is that too.

We have 3 dungeons with about 2 main parts each. So about 6 levels of monsters, however we may want bosses to have their own special classes as well. So I’m just brain storming right now but I could see it going:

Dungeon1:  Difficulty level 1-3 with boss being it’s own unique level (probably based around level 6 as it’s a side quest)

How about we go back to thinking about levels. We can think about difficulty: easy, normal, hard, difficult. We can think of the Typings. Dungeons you’d assume would get higher and higher levels of monsters, based off some sort of difficulty. So in reality we want something like this:

…etc etc I think you get the idea

So yeah, I left some notes on something I didn’t end up going with, as this is to show my thought process, and I only really want to make minor edits to this document (mostly for clarity and to split it up into sections).

Then for individual monsters I can choose to mix and match stats if I want to. Maybe even–no, we don’t want to have individual monsters of the same type vary too much in their stats, as you’d want the player to come to know what to expect from a monster.

Enemy Levels also allows for moves to be unlocked at a certain level, so that will be fun!

Okay, so back to fixing those enemy class level difficulty things.

Now this list looks better. By the way, I started out forgetting to write in Shock, so I had to do some copy pasting to get it in the right spot…no way I was going back and rewriting everything…

Okay, now back to that spreadsheet!

BACK TO THE SPREADSHEET

(I’m somehow still not on page 40. I only re positioned a few images…)

But documenting like this is really good, as it lets you know what you’re doing, and you can even test numbers and formulas in Google Sheets (What about Microsoft?!) Yeah, sure whatever floats your boat. I just use Google Docs/Sheets cause it’s free with auto save to the cloud/Google Drive.

Anywho, back to that spreadsheet (or maybe not, Hubby is home from his fishing trip, and it’s 10:67pm)

I’m thinking of saving the Lunatic levels for post-game, but anywho I wrote them all into my sheet. I’m going to make a table for their level up formulas….wait did I not write in a column for the exp gain thing? Lemme go look at what I need for the plugin/parameters….

So with the consept of Big HP/Damage and little Stat numbers, I’ve started to build my level up formulas:

Basically, I thought about how big the HP should be at level 1, then for the enemies, I thought about what would the attack be to get that HP down in about 6 moves? Doing some math, I came to 3. The Enemy’s HP is higher than the players to account for the four people who could be attacking it. That may not work later as I figure out how big an enemy troop will be, but we’ll see. These numbers are just a starting point.

Now I’ll just brainstorm which typing should be strong in what category. For the players, we already know each character’s preference, so we can determine their stats accordingly, for the players actual character, they will be more well rounded.

MaxMP is put at 0 because we don’t use it. I have tricks sometimes to have that number represtent something else, like a drop item or something to do math and formulas with…but that’s in a different game.

By the way, these are formulas, not just static numbers, so when I change the level number in D2, the numbers will change to reflect the formula:

So, I set the EXP gains for our heros. The Player is well rounded, Rival is fast, Grace slower, Summoner slowest. Because Summoner is so slow, I want his main stats to be higher to make it worth it.

I have to remember how I was going to have stats influence the typings:

Things that heal will pull in M.Def

Things that cause status effects like poison will pull M.Att

So for Grace, she’s a healer who uses Shock. Her focus however is healing so she will have strong M.Def, but very weak in M.Att (which will also mean she could be poisoned easily?) She will have lower attack, and higher defense being the healer trope. Her HP is more standard.

So for Summoner, he’ll be high in M.Att, but low/average in Defense, his attack will be a high average, and his M.Defense is lower (perhaps makes him harder to heal) however being harder to heal, his HP is high.

Rival is all about speed and doesn’t care much for either M.Att or M.Def. His speed is high so he will normally be the first to attack, and his attack is high. His Defense is average, if not a little low. He levels up faster as well.

Player is well rounded, being an average of everyone else. Perhaps we will have some crafting items that can effect the players stats via players choice.

That’s it for this week! Next week we’ll talk about Feature Creep!

Thanks for keeping up and God bless,
Meike Kima