I want to take some time and talk about feature creep. I had stopped my work last night [remember these Dev Logs are about a month back] but my brain was still whrring with ideas. I came up with a feature I wanted to add to the game.

Feature creep happens. It is nearly impossible to avoid. So I’m going to talk about how I handle it.

So I came up with this idea of a simple friendship system to get to know the various NPCs. Because there are a set, smaller number of NPCs with Aekashics packs, and being the Quest System is built to have you doing quests for these NPCs I figured we can do some worldbuilding and make these NPCs more likable by giving them their own little stories that you learn about the more quests you finish for them. Say 10 Friendship points each, where hitting a point activates a conversation. Not a cutscene, just a short little conversation. Not everyone would be super detailed, some would just be like:

Boy: Thanks for this item! Tonight my mum is making apple pie! It’s yummy!

Boy: Thanks for this item! Mum makes apple pie for Dad cause it’s his favorite!

Simple things like that, and depending on the character I may make 1-2 cutscenes to be unlocked. Such as walking into the Boy’s home and being offered Apply Pie from his mum and his dad complimenting her baking. I’d also have the friendship level negatively affected if the player chooses to take a quest, but then quits it.

But, should we add this system?

Ask, is it out of scope?
The game is a dungeon crawler with quest system and crafting. The quest system is already planned to make us interact with NPCs, so the NPCs will already be in the game. We’re not planning an overly detailed system with say, romance or marriage, just unlocking little snippets of the character’s lives. Deals with variables. Very easy.

So how easy is it to implement?

Easy. It’s variables and conditional branches. Writing and silly quips come pretty easy for me. It won’t involve fancy plugins, and adds to the worldbuilding instead of say…a collectable card game…-cough-

So I’m going to add this system in HOWEVER, the main systems such as the battle system, crafting system and Quest System, will have a higher priority for implementing, so fleshing this system out will be one of the last systems we do.

FEATURE CREEP WE CAN NIP IN THE BUD

So what about when you get an awesome idea cause there’s an awesome new…say…collectable card game plugin? What then?

We see this awesome card plugin and then think we can have monsters drop cards that have their stats on them, and then maybe the player can collect them and use them in crafting.

Ask, is it out of scope?

Admit it, the cards are appealing because it’s a fancy new plugin. What would crafting with fancy cards really benefit from your game? How does this fit with the world you’ve (I’ve) created? As I think about it, it’s an entirely new system that doesn’t really advance the storyline, or mesh well with the other systems without forcing it (crafting with cards? Really?) You’re trying to make a smaller game, something easy to design. This doesn’t really fit.

How easy is it to implement?

The card plugin is a very detailed. There are card backgrounds and other images you’d want to customize to fit our game, there are a ton of notetags to add. It’s not a fast nor easy system to implement properly.

This feature is nipped. It’s just not reasonable to add.

(now stop mentioning that I added it into Reel Dream!)

BACK IN THE EDITOR: TEST MAPS AND REAL MAPS

So, I can’t find a link to the comic because of Yanfly changing their website, [*cough* here it is: http://yanfly.moe/2017/01/07/comic-lets-make-a-game/ ] but he had a Let’s Make a Game comic that talked about making simple maps that held the basic doors and such for each room from start to finish. Obviously I can’t explain as well as that comic.

But basically I’m making the maps I need. Not setting anything fancy other than a starting tileset and will be connecting them with transfers.

I also have my test rooms I made earlier. As of now, this is what the maps look like: 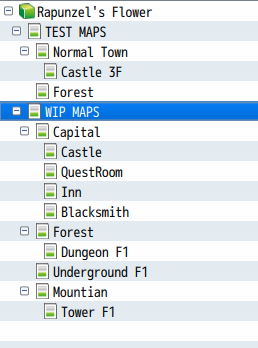 More will be added as we go, and I’ll probably have rooms dedicated to starting a new game where player character selection and other things get set up before sending the player to their house–no their room in the inn (cause they traveled to the Capital for the hero test they do not live there) and have splash screen rooms and such.

And so, now that I started to put those simple maps which may have been unneeded at this time, I’m going to go back to my Google Sheets and play with those level up numbers….

Okay, it looks like even with Yanfly’s core changes, the max HP is still 9999….so we’ll adjust our HP…. [I hope I mention later how I found the notetag of yanfly’s that allows for it to go over 9999. cause I did find that]

THEN I realize I don’t have my battle formulas to reflect how I wanted small stat numbers, big hits…

DISTRACTED BY AN IDEA I HAD 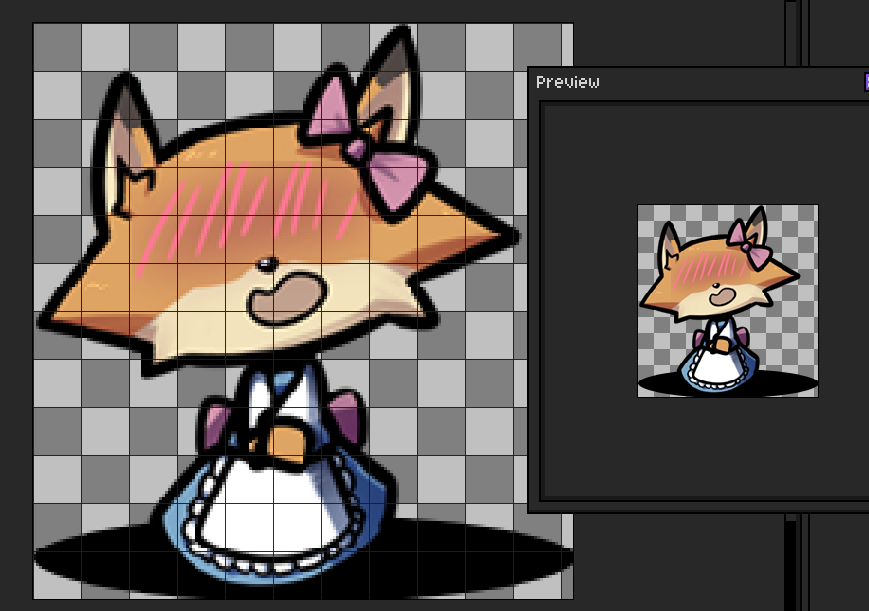 Playing around with some resizing and some copy/paste you can make the faceset emotes into charrie busts.

Note that I took the bust and resized it to 95% to get the faceset emotions to fit.

I’ll be remembering that and editing those graphics after mechanics are all set. Cause I’d rather have cute busts than facesets anyday.

That covered a few different topics at once! That’s all for today, be back later in the week with more!