BACK TO THE ENEMY BALANCING

I’ve gotten on the spreadsheet the starting numbers I’m going to use for each character and their formulas:

Currently I have just set everyone to the Player’s formula, even the monsters, and having only played around with raising the monsters’ HP, I can see that things are already interacting nicely despite having things that obviously need adjusting (like what I thought I’d set monster HP to)

Basically, I just was testing in a similar version to Lunatic however, where one random encounter could kill an NPC…not what I actually want, but it shows me that this method is working.

We’re using Yanfly’s Enemy Levels and Enemy Params I mentioned that right? Along with his class param stuff?

Notepad is actually a helpful little companion of mine when I just need to get simple text information from one point to another: 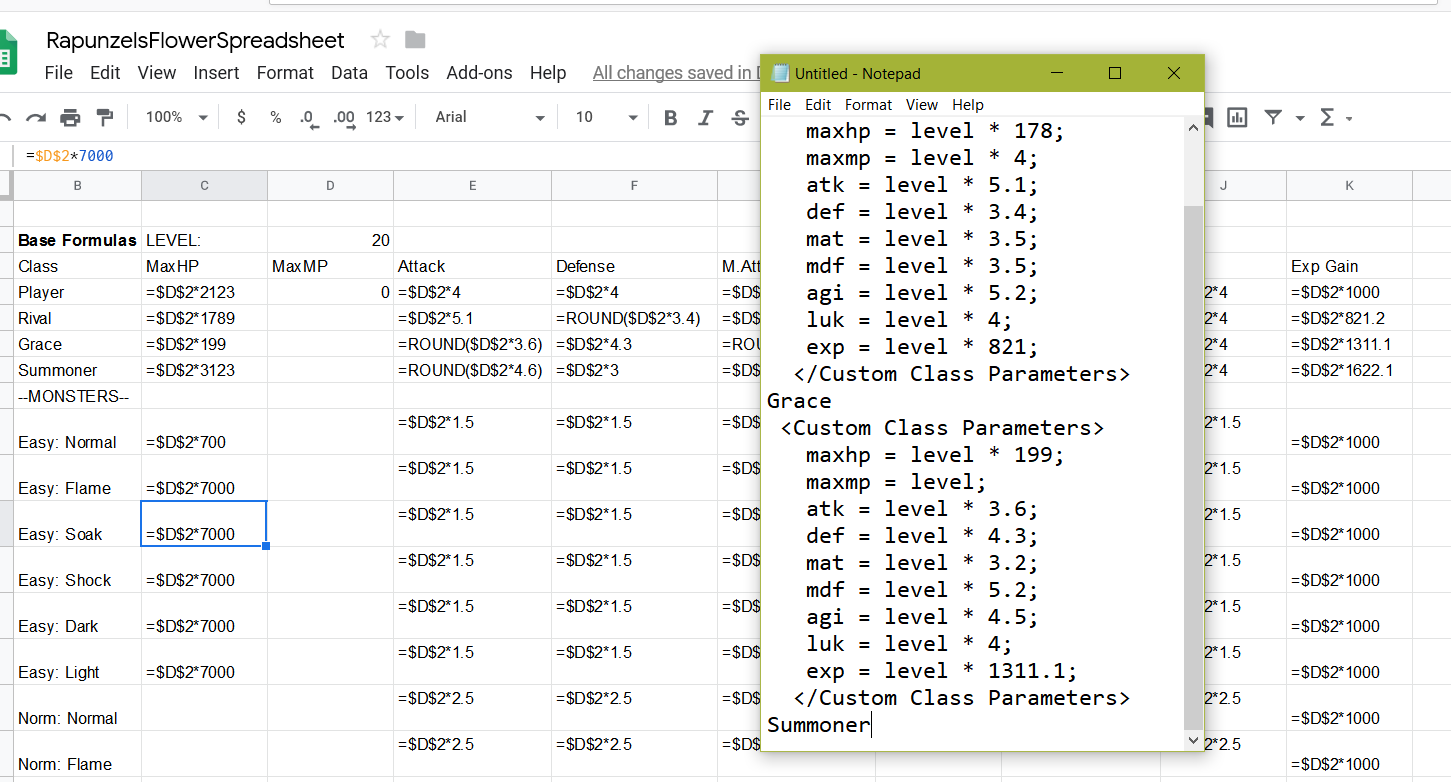 Here I am typing in the notetags for each class param before I’m going to copy them into the Database in MV.

Now as I work on this, I’m starting to think that I should instead do something like:

Because in the end, the stats are more about whether that monster will be strong or weak in something. I can write notes that say what element tends to have better stats, but just as with the main party members, it’s more based on how they will use their moves and what role they will serve (heh, I wrote roll and corrected it to role…I must be hungry)

This also makes it easier as I just have to find a number that represents easy,norm,hard etc and put that for all stats, instead of thinking of individual stats for all of those (do you get what I mean?)

It’s 12:30am I need to go to sleep. I’m only half way through putting the data into the database for the enemy difficulty classes….it’s mostly copy and pasting and changing one number for each level….1.15 becomes 2.25 becomes 3.35 etc…..

Tomorrow is Monday. I’ll only be working on this in my sparest of time. This week is busy for me, so I may not get back to this until the weekend, but even then, i am busy…I’m going to try and at least get one or two nights in, as long as I use the day for my commission and then for Reel Dream work.

Already doing a quick test…and the numbers are way off…I think I know where I went wrong, but oh well. I made them too weak making them mere fractions of the players stats, but this makes it so that the weakest enemy is never hitting damage.

We don’t wan that. They got to at least leave a little mark.

So I think I’ll have to go back next time and modify the numbers to be closer to the player’s stats.

Okay, it’s another day, but we’re still working on those numbers! I got my spreadsheet o–NO NO WAIT. It’s 12:12 am….HOW’D IT GET SO LATE? Nevermind, I’m going to bed. In other news, I’ve started to post the dev log on Patreon and am preparing it to be posted on the website too.

I’m also looking into designing an official title logo. Thinking this may do, and I’ll turn that apostrophe into a flower:

When I get to working on it I’ll probably play around with the shape of the R and F. Maybe find a different font for them.

I ended up doing a little work in the Spreadsheet fixing the numbers, but I just had a Septoplasty and wasn’t able to manage much.

I can’t stand the RTP grass. I tried looking for one that I had found a long time ago that I liked, but I couldn’t, so instead I decided I’d add the tile resources here: https://forums.rpgmakerweb.com/index.php?threads/dels-ressources.97488/ 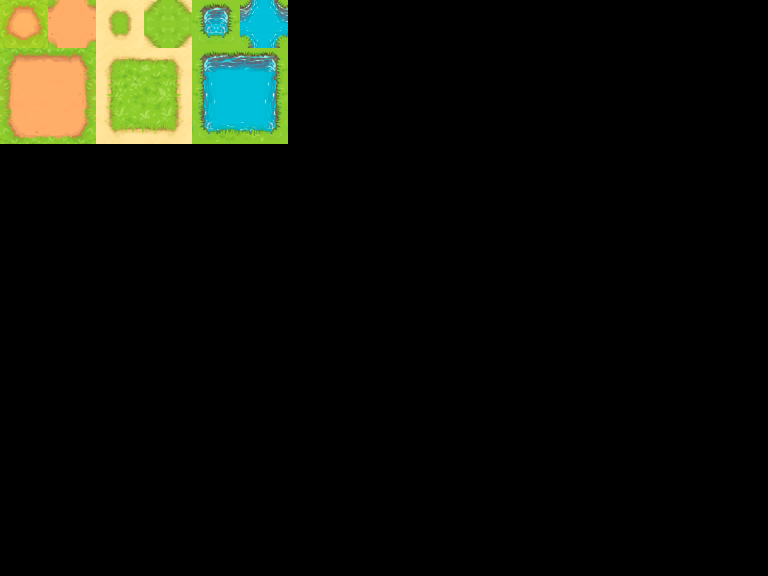 I really only ended up using the grass and the water, and I edited them myself so that the water is animated and so that it uses the original RTP cliffs as I’m not a fan of Dels’ cliffs, and may use someone else’s (I think Panda Maru has some)

As for real work, I’ve worked on the database again trying to fix the stats for the monsters…just to find that I’ve made some too strong now! Some silly little grasshoppers almost killed my party: 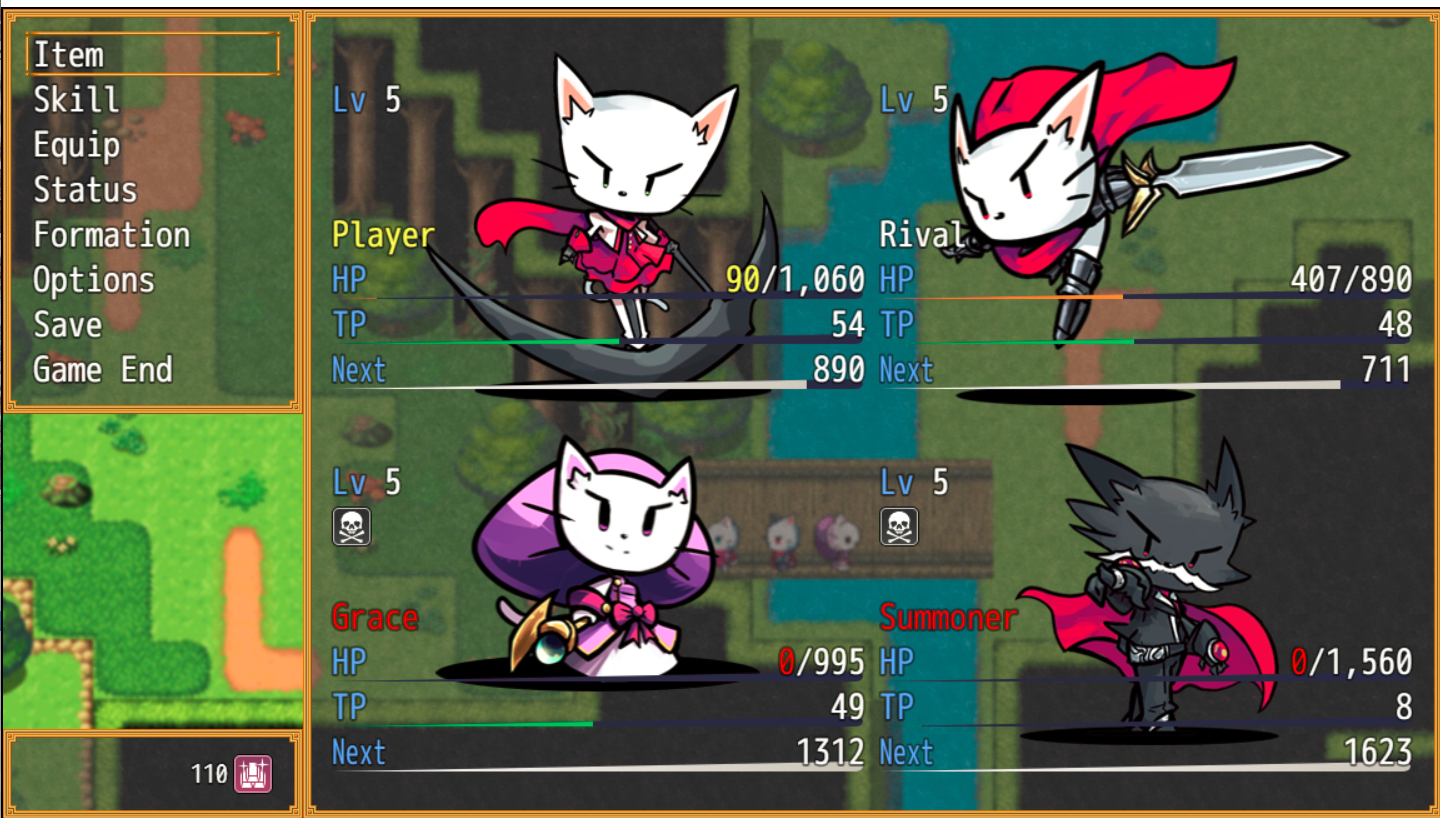 Also thank you Rocketmancer for the Pretty Gauges plugin. Don’t have a quick link for that cause I’ve had it on my computer for a while. [here it is]

So yeah, basically today was going slow with the databasing, getting distracted by tilesets and menu setups as well as battler positioning and testing out if I’d use Olivia’s Battle UI…which I found out I won’t. Here’s what battle looks like for now: 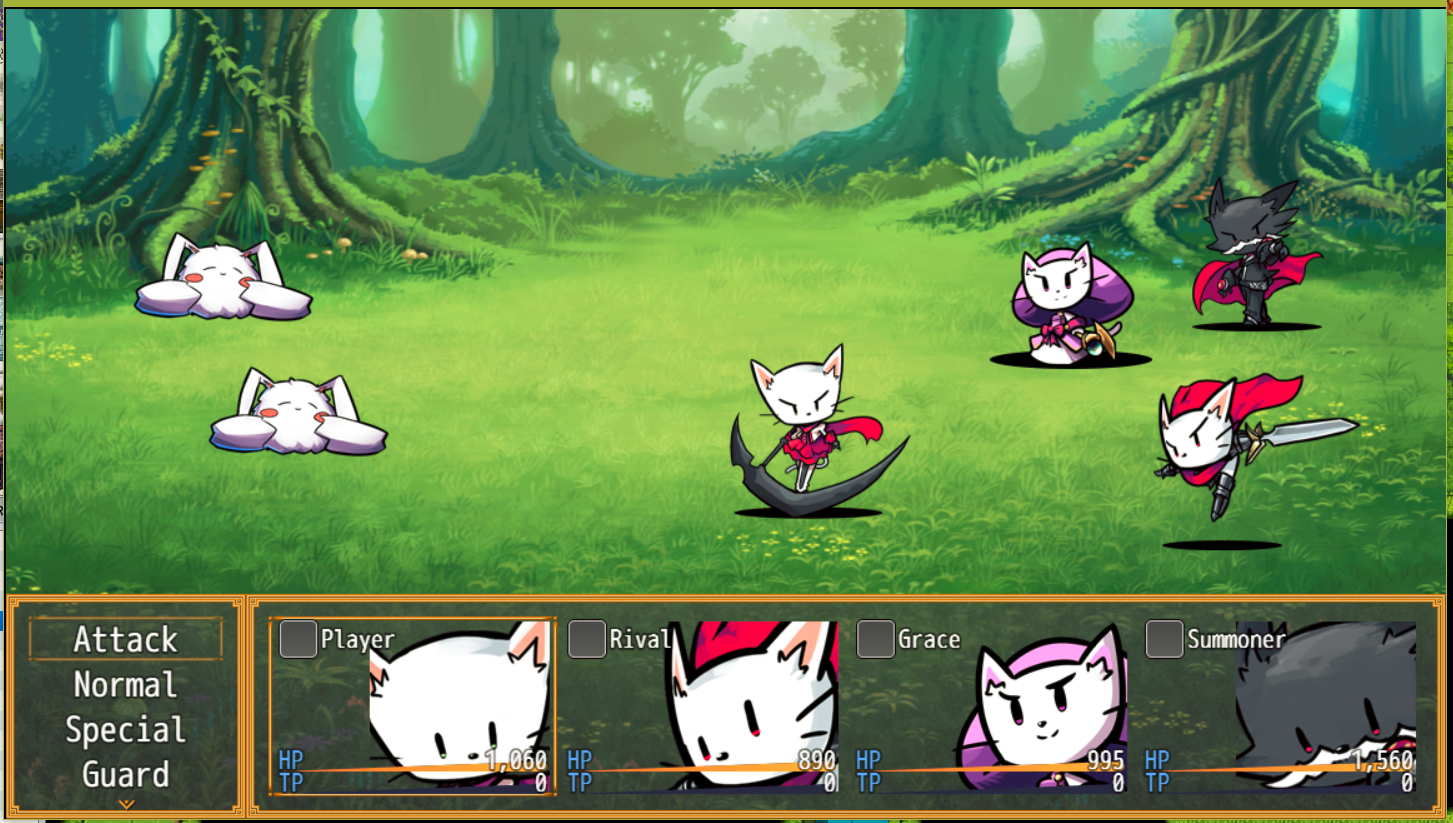 I even played with SRD’s Menu Editor but to no avail. I don’t want this game to get too complicated, so I’m trying not to do too many fancy edits, which basically means no Luna Engine. 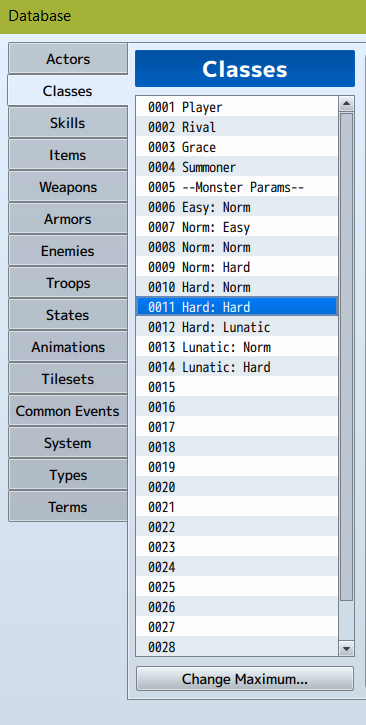 I’m honestly liking how the RTP Battlebacks are looking with the characters and monsters, so I may just keep with that.

And now, after some time of playing with numbers, notepad and calculator…it seems I have come up with numbers that play well together, as well, I’ve taking the enemy difficulty classes down by a lot:

Anyway, this actually brings the game pretty far, as I can set up the monsters with this basic difficulty and set their typing.

So far, so good! I also changed the battle damage image to Lady Luck’s Persona-like numbers to add to the cartoony look: 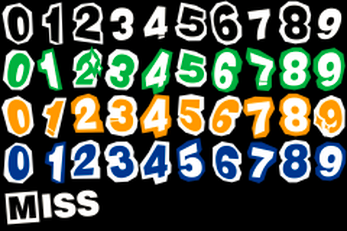 Overall, I need to update the spreadsheet with the numbers I figured out, but I need to head to bed, so that’s all for tonight.

That’s it for this week! Being this mentioned my Septoplasty, that means this was back around July 18th, just so you get an image of how far back this is. Anyone interested in me posting more to catch up or no?

Thanks for keeping up and God  bless~
Meike Kima