I got so stuck yesterday trying to figure out my enemy and player level up numbers that I really didn’t take the time to write. Basically I went back and forth trying to figure out formulas for stats as well as damage formulas…this doesn’t come easy to me, I really don’t know what I’m doing and with Yanfly’s Enemy Levels, the numbers would interact in a way where if an enemy was eve 2 levels lower their attacks would be nothing. So that’s what I’m going to try and fix.

It was just a long day of me scratching my head, not understanding what I was doing really.

I did finish some databasing with the enemies and worked on using my test maps that will reflect the official gameplay, making a mini version of the first dungeon to throw the first level monsters in. 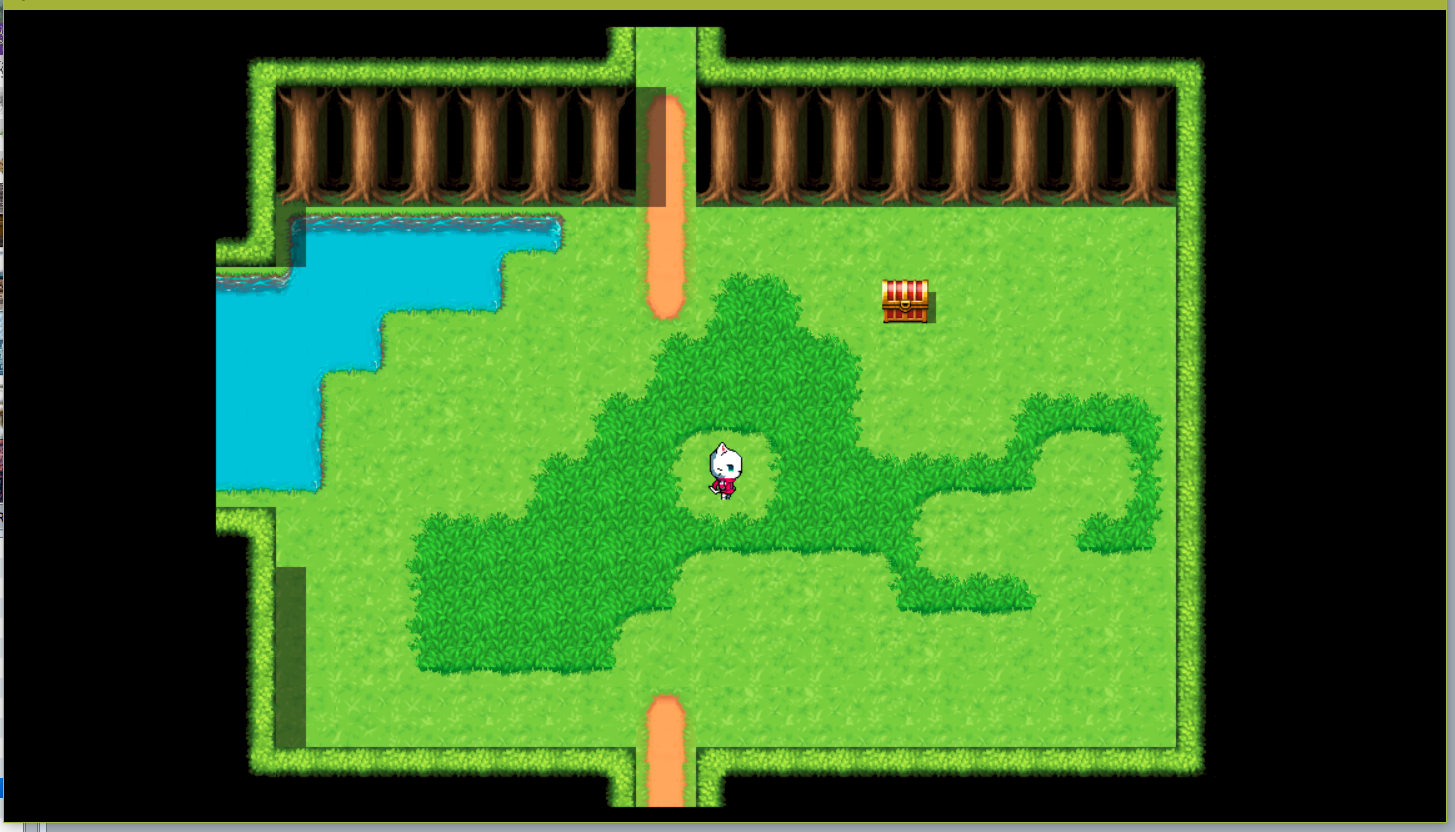 I’ve also realized that I have to test the monsters against the player thinking of how many party members they will have when they encounter the monster, so I have to think of 1 on 1 scenarios.

I also added a playtesting skill to be able to scan enemies to see there stats, using this Tips & Tricks video from Yanfly: http://www.yanfly.moe/wiki/Libra_(MV_Plugin_Tips_%26_Tricks)

I changed the class parameters for monsters to instead just record a ‘base’ leveling for the enemies, and then I’ll go through and change and tweek individual monsters.

Flying Dream’s Level Calculator came into play and sorta helped, and gave me some ideas. http://yanfly.moe/tools/enemylevelcalculator/

Despite being one who makes RPGs, the battle system and the math and complexity of it is actually one of my weaknesses. I don’t fully understand all the effects going on and that’s why I try and keep the battle systems simpler, and not so complicated.

It’s also why I try my hardest to balance the games. Even if it’s a relatively simple system, I don’t want it to feel broken or unfinished.

July 27, 2019. I got my mum-in-law up and it’s Saturday, but for once we seem to be staying at home. I’ve got this document caught up and did some balancing work, to where I’m statisfied to at least start basing stats off of my base formula, but other than that, sighs, I think what I should do is go through this document and start planning and schedualing the posts. It gets a little frantic when I’m trying to do posts the day before or even the morning of. I have a LOT of content here written up, so I’ve got a lot that I can post ahead.

So I think I’m going to start doing that.

I FORGOT TO MENTION THE NEW LOGO AND TITLE SCREEN

I’m not even sure which day I made this, it was a few days or so earlier this week, but I did what I said and used the fonts I found online (I actually used 3 to get the look I wanted) and created the title logo, then threw it together with a different image for the title screen: 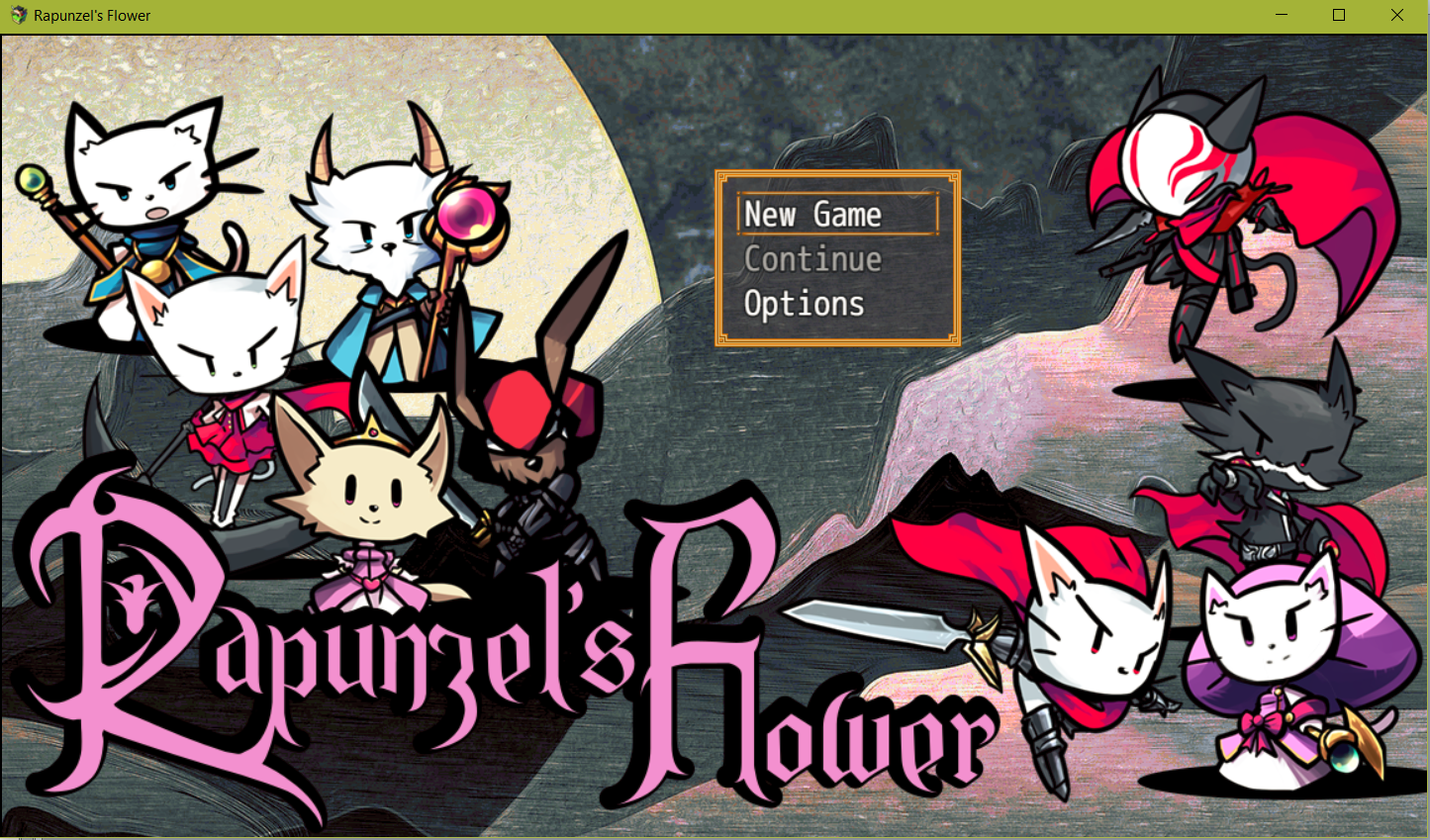 Today I tried to sit down with a notebook and write. I wanted to think about the mad lib quests that the quest master would have. Honestly, I was originally wanting to write down plots and ideas for Reel Dream, but my kids weren’t really letting me think straight so I decided to switch gears and work in RF.

Here’s what I got:

Still not fully sure on HOW I’ll implement this, but it was what I could work on.

Also, I think it was last night or yesterday or whatever but I stumbled across what was the formula behind the stat differences between Yu and the monsters. I added that quickly into the RF spreadsheet and will look at it for reference. Tho if I remember right I was still playing with numbers even after that.

So using the concept from the Well Yu numbers (basically things started at about ⅔ the power of the player) I played with the formulas and the attack formula and seemed to have come to something workable.

Then I got distracted with tilesets, specifically the ones for the capital. Houses. I needed houses. And where did I find the best pieces?

Surprisingly they were in the DLC folder of MV. I have the Steam version of MV so there will be little DLC updates from time to time that I don’t always realize I have. One of them I found was actually part of the DLC I got for buying MV on release, the Essentials Set, and the other…I’m not even sure what it was part of, but it was showing off some partial plugins and also had some nice roofs.

So I’m going to build it from there. I played with a lot of mix and matching and got some cute houses: 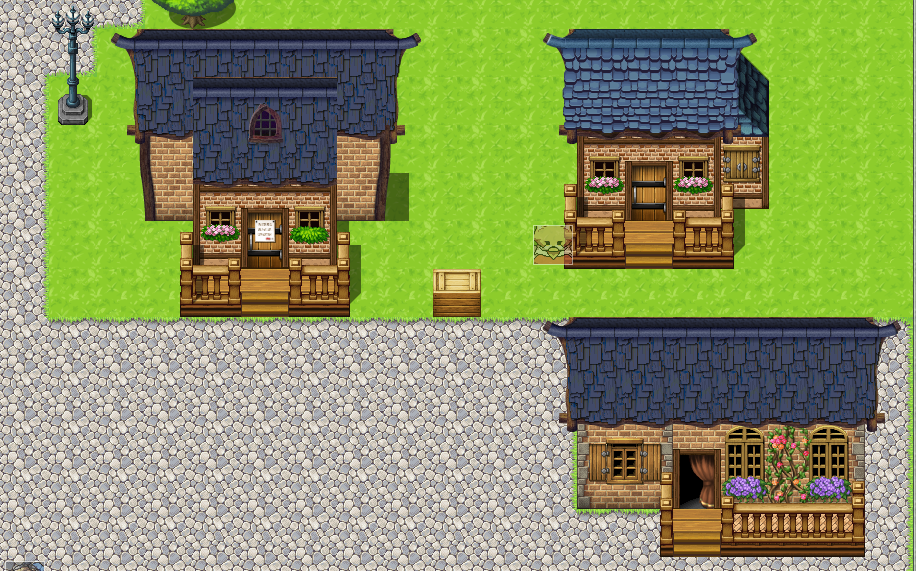 Eventually, I’ll probably take them into Asesprite and make them all one tilesheet of how I want them, as MVs tile layering…killed some other tiles during playtesting.

Overall, today was a pretty productive day for Rapunzel’s Flower.

So tonight (okay, last night, I didn’t get a chance to type this up) I worked more on those tilesets above.

I actually took the original tilesets into Aseprite and created the houses to be used in stand alone tilesheet. I had to remember to keep them modular, so that I could use the same base house and create multiple variations by just swapping a few tiles to save space on the tilesheet. 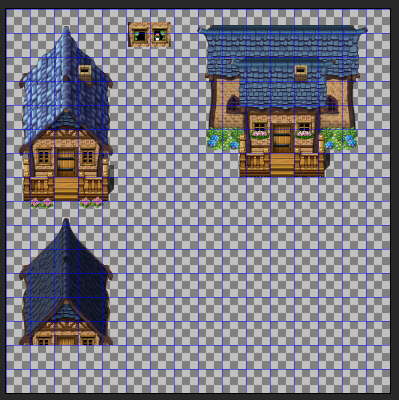 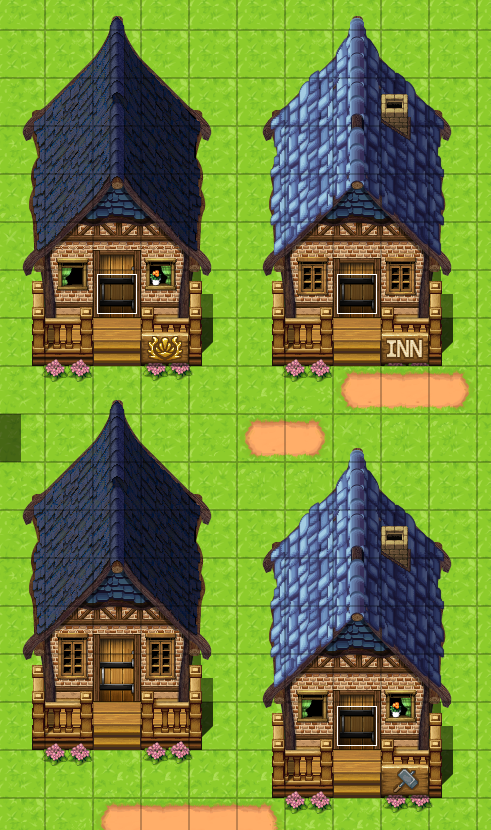 So I did that instead of other things. There’s a part of me that really wants to start designing the world as I’m building these monsters that way I have a better idea of the area I’m going to be using.

Being I also know the exact maps I need I can build the tilesets for those specifically and get rid of the unnecessary elements on the tilesheets…you know, like….snow tiles. Don’ need that!

I bought a lil charrie pack for like a buck ‘cause it looked like I could easily make it blend with the Kemono packs…but then I realized there were no facesets/busts for them AHHH I can’t do that ;_; oh well, that would have put me out of scope anywho. Lol they were only a buck so…no harm XD I’ll use them another time!

Thanks for reading and God Bless,
Meike Kima