NEXT UP: TEMPLATE SKILLS/SKILL DESIGNING

On paper I’ve been drawing out what skills will be in the game. I like to try and figure them out following the ideas presented in Yanfly’s comic: http://yanfly.moe/2017/02/04/comic-lets-make-a-database/

Basiclly I’ll start making template skills based on the games progression: Flame 1 Flame 2 Flame 3 etc for each element, and for other skills like healing and buff/debuff skills they may only cover two or so of the skill progressions.

I’m going to take my ideas back into the spreadsheet. Though it is getting late, I may save this task for another day.

This is just a list of basic moves to go into the game, and already we’re up to….*counts*….65?

That’s a lot…and that’s not even all that I potentially want to use as I want to go through Yanfly’s Tips and Tricks http://www.yanfly.moe/wiki/Category:RPG_Maker_MV_Plugin_Tips_%26_Tricks to see what I want to include, as well as just brainstorm. Later.

I also updated the credits page. Have to keep on top of it as those cute lil houses were a modgepodge of three different artitsts’ work. Whew!

I then thought about the iconsets…MV’s default really doesn’t work for the cutesy: 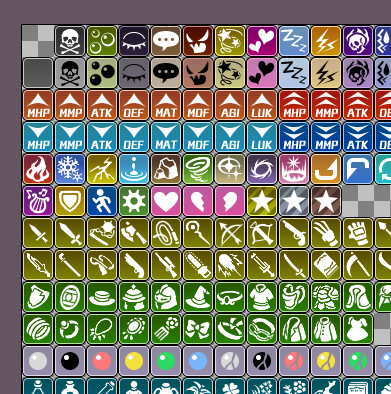 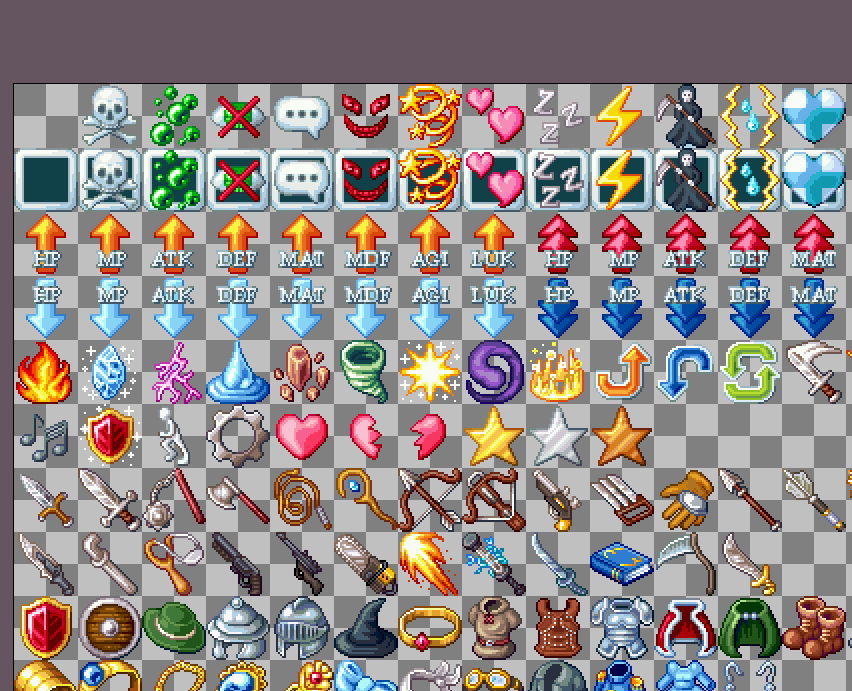 They’re so much cuter and colorful, and there are so many colorful pieces for the crafting system we’ll be putting in!

Speaking of that crafting system, all those 65+ skills need to be connected to equipment, as equipment will give our player’s their skills! Different equipment may add more than one skill, but either way, we have the potential for 65+ equipment!

Part of their equipment will be Trinkets. These ones I’m thinking will mostly add buff/debuff and other type things, and perhaps have the ability to add/change attack elements and stats.

STAY UP LATE; WRITE IN MORNING.

So yes, Hubby went to a football game so I was able to be free at night to work. So I stayed up late and didn’t really write as I go.

As planned though I did write all the base attacks into the database. Really not much more than writing in their names, but I did work with determining the formula for the basic weapon attack: 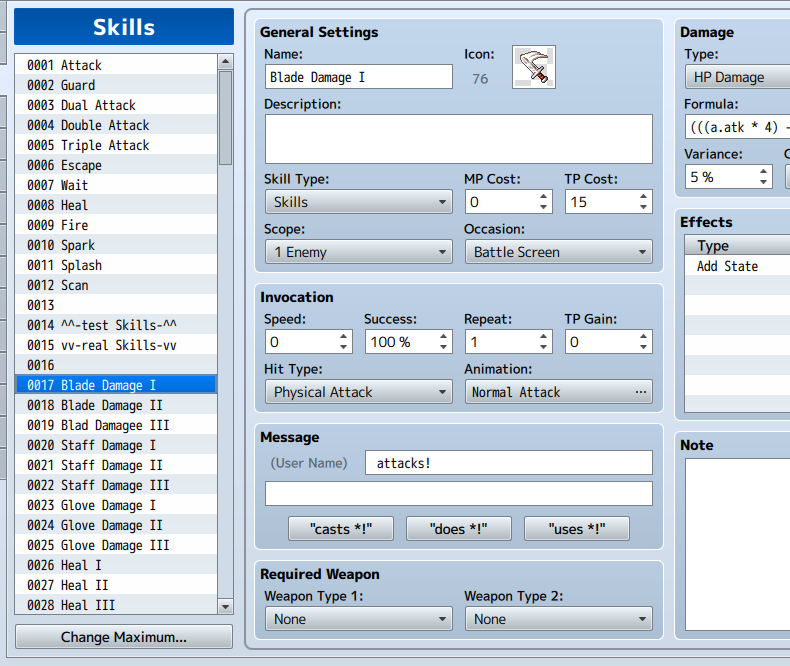 I had some balancing issues last night as well, as I had previously made the enemies a separate attack to try and balance and I didn’t actually want that so I had to do some adjusting of the leveling formulas as well as the damage formulas…again….

I think I got it this time though.

I then got into the complication of how to restrict certain characters from using certain moves despite being able to equip the armor that it goes with.

Really though, it started with me not wanting the different skill types to be shown in the battle window separately:

That’s just a long list to go through, however, despite all my googling I couldn’t find a plugin that would allow the different categories to be shown in just one Skill list, that way I could restrict the moves via locking them for the actor….

And no, Yanfly’s Multi-Skill Type plugin would not work as it would make every player able to use all skills being I’d have to add the generic Skills type to every skill….and….and….

I’m sorry I don’t have screenshots. I really should have been more aware of the changes I was making to show you.

In the end, searching through plugins and thinking about how my game works, I decided that I would use Yanfly’s Equip Requirements. 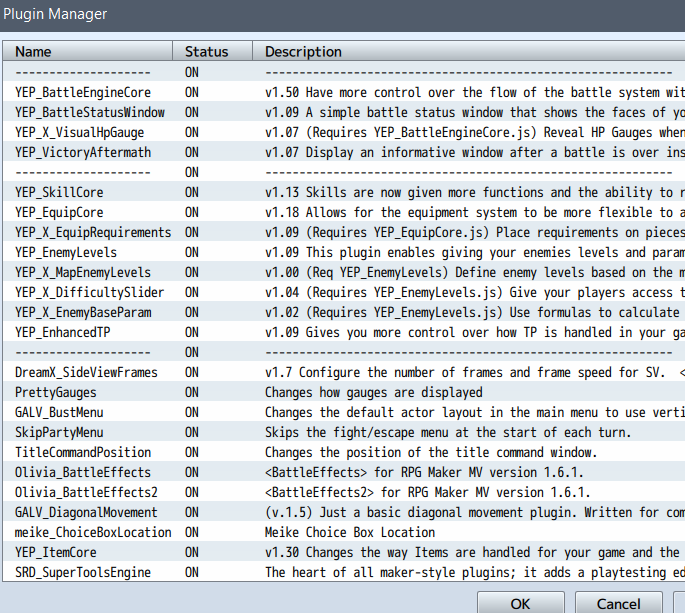 With skills in the game being added by Equipment, I could individually take armors and say ‘Rival can’t equip that Blade because it’s an Element he can’t use’

I made some template weapons to show the standard equip requirements so that I can copy them and have the notetag already: 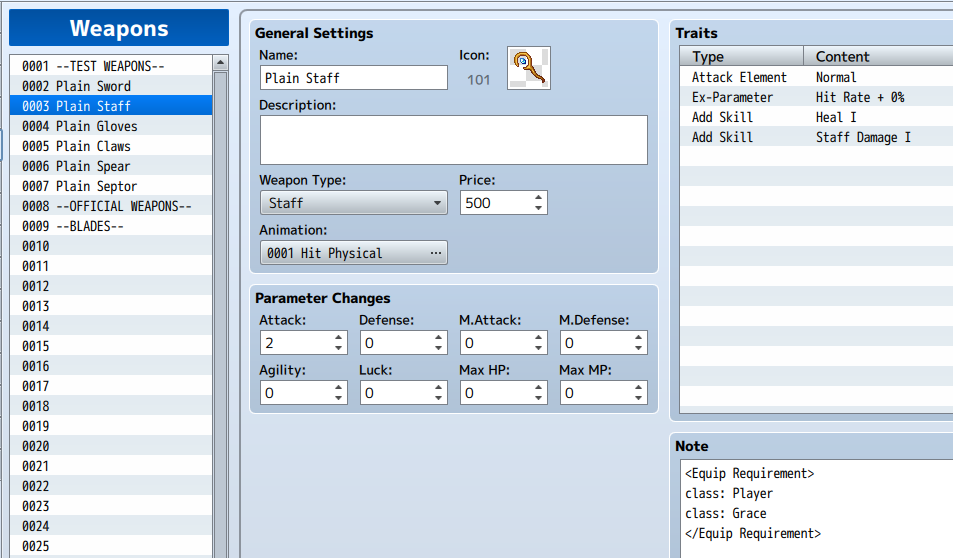 So you’ll see that, as a standard, Player and Grace can equip the Staff.

You’ll also notice I added some new weapon types. Claws, Spear and Scepter. Just for some variety and so that the other party members have equipment that they can share between and allow the player to customize them more. As planned, the Player can equip all of them.

So now, if we have say a Dark Staff, we can say that Grace can’t equip it because Grace can’t use Dark Energy, despite her being a Staff user. This prevents her from using the Dark attack that would be attached to the staff.

So back to the battle menu. Restricting moves by restricting equipment allowed me to stick all skils into one skill type: skills. I also used Hime’s Actor Battle Commnads and Battle Command: Use Skill to take away the Attack Command (whaaattt?) as I added Attack into each actor’s Skills.

I then used the Use Skill plugin to add the Escape Skill to the menu as using the Battle Commands a…..which as I write this I realize I may not need to do that if I rearrange my plugins to put Hime’s above my plugin that adds the normal Escape ability below the list…. 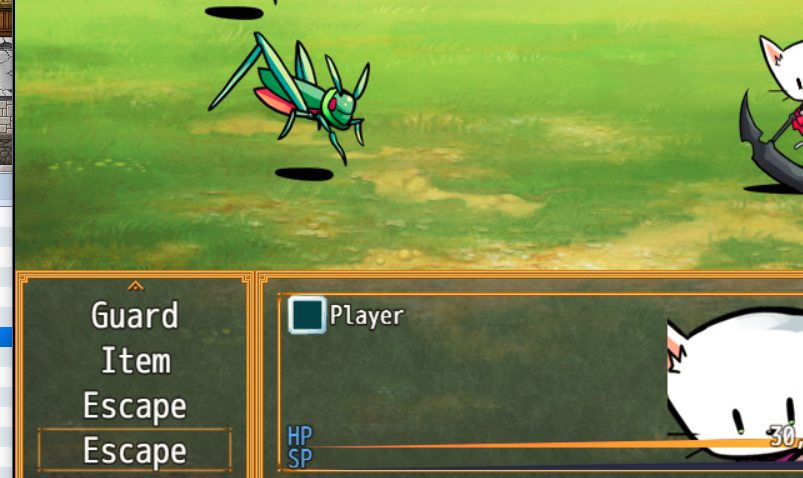 Okay so now I’m going to get rid of Hime’s Escape and the Use Skill plugin…after I finish what I was writing about last night! 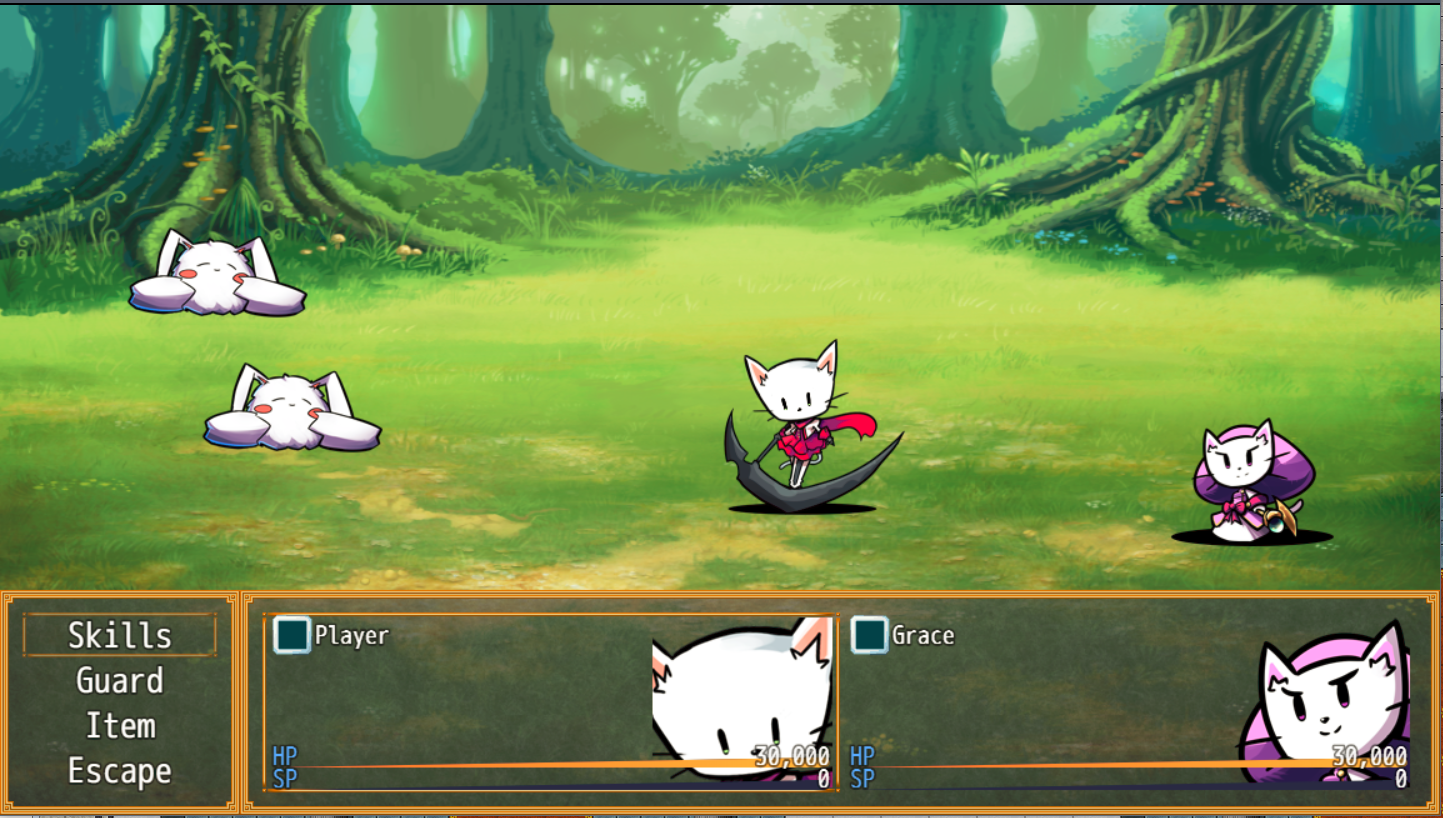 Okay, nevermind I got rid of the plugin so I could give you the screenshot of the final goal, to keep the command window with four items, and Attack is now put into Skills. Could people be upset by this because there’s one more click to just do the basic attack? Perhaps, but there is also less button presses to get to your other skills, which I hope to make this more than just an Attack Spam game anywho!

So that was the major work last night. There was one other thing I played with, but not much yet, and that’s Yanfly’s new Map Enemy Levels: http://www.yanfly.moe/wiki/Map_Enemy_Levels_(YEP)

I’ll be using it to set minimum levels for areas as well as potentially setting a max level for areas that will change as the player progresses. Such as Dungeon 1 having a cap of level 15 until the player defeats dungeon 2 and then it will cap at whatever Dungeon 2 caps at. That way the player can’t just keep going up up up without progressing in the game, while still keeping the post game able to have strong enemies in all areas.

But I didn’t play with it much last night and I just thought of the level caps this morning.

I also played with some of the mapping. The temporary map for the Castle has been turned into the Castle map that I used before I set the templates, which is actually an edit of a pre-made map the system had: 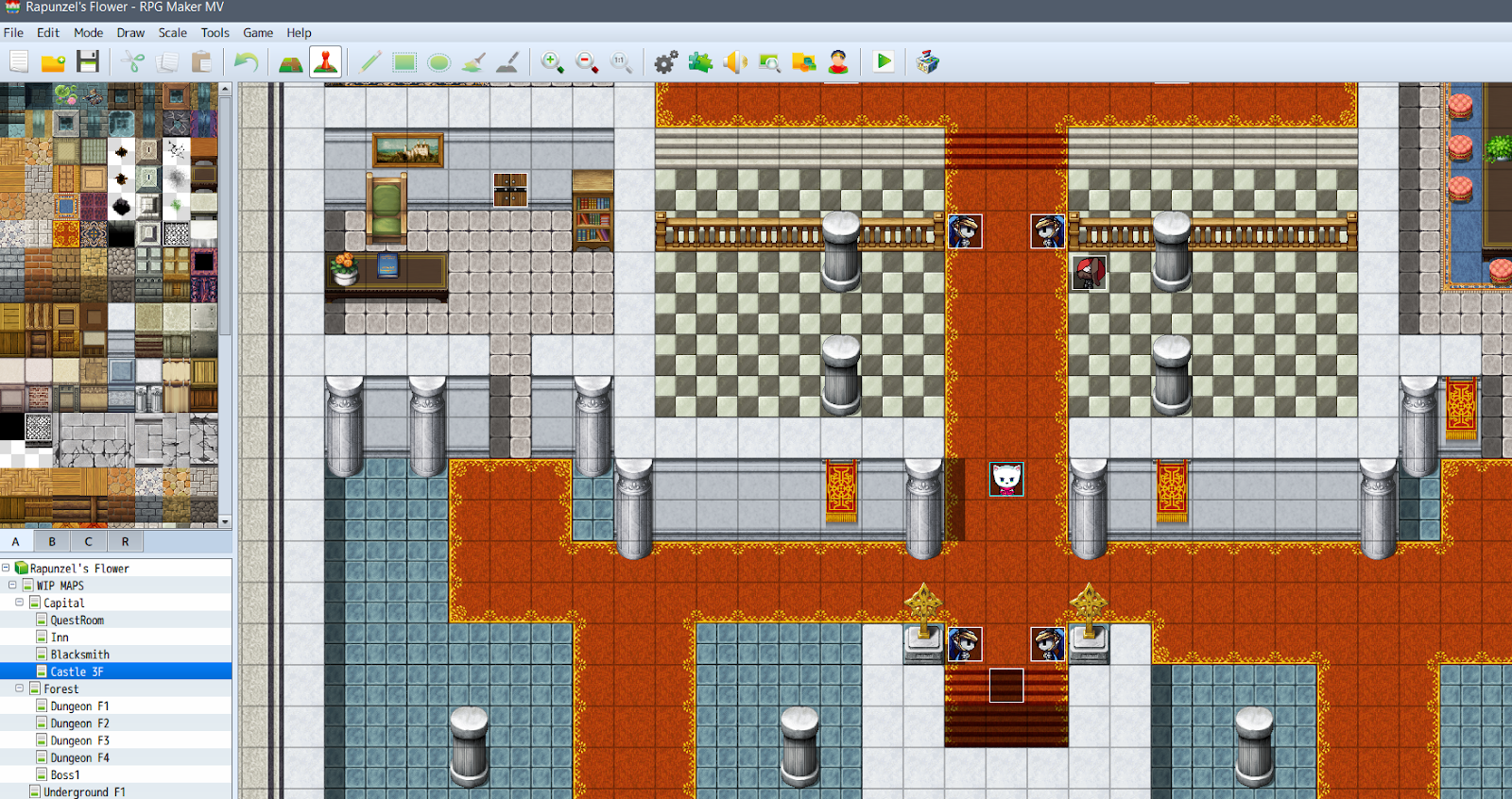 It’s been customized, but for the most part using the pre-made saved a lot of designing time.

And that’s about it for what I did last night, and of course, you know a bit about what I did today haha.

The next thing I should do is continue to work on the skills, figuring out the basic damage formulas, setting the typing, etc.

That’s all for today!

Thanks for keeping up with me and God bless!
Meike Kima