I HAVEN’T BEEN WRITING AS I SHOULD

I’m actually on a ‘hiatus’ now (Sept 24ish), for many reasons, including that my daughter took off so many keys off my laptop keyboard that it is almost useless to me now. And all my spare keyboards? Too small, fn keys annoying to use, sticky keys or cause wrist strain fast.

So I haven’t been writing as I should, and RF has gotten pretty far ahead in areas. I’m also not sure which order I did things, so I’ll just try and recap: 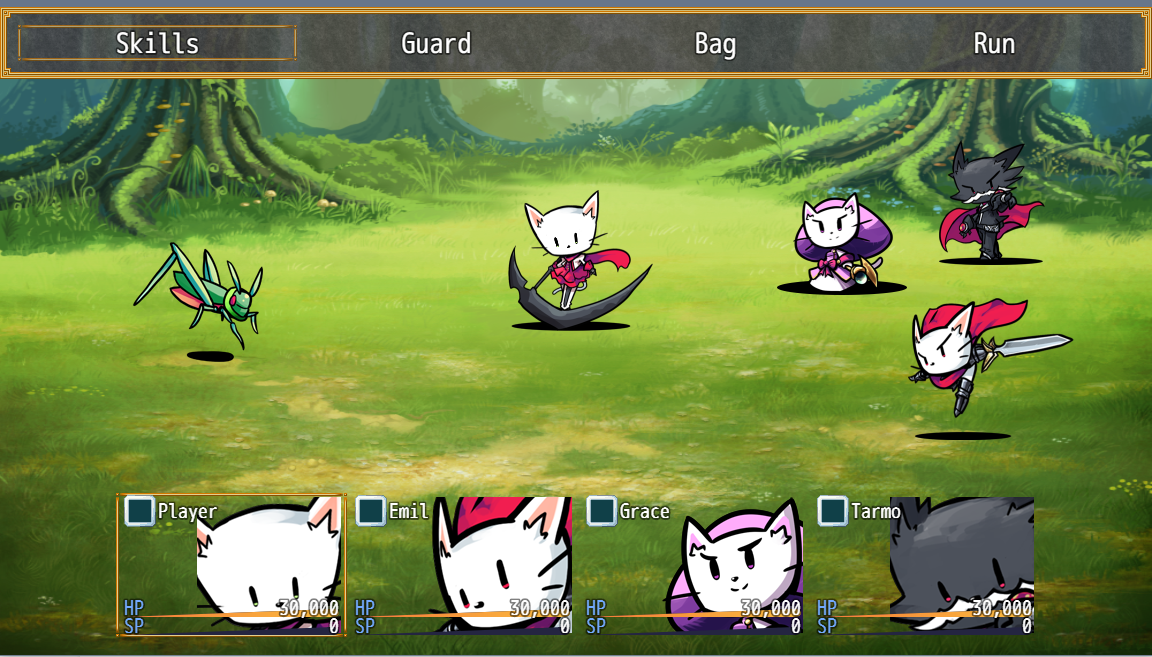 I’m finally satisfied with the layout of my battle scene. It’s still got some of the genaric RPGMaker looks because I’m using SRD Menu Editor and not something fancier like Luna, but it still has its own twist on the system.

It works with how I want the skill and item bag menu to work, though I think I still have that minor glitch with the actor being too far forward at first: 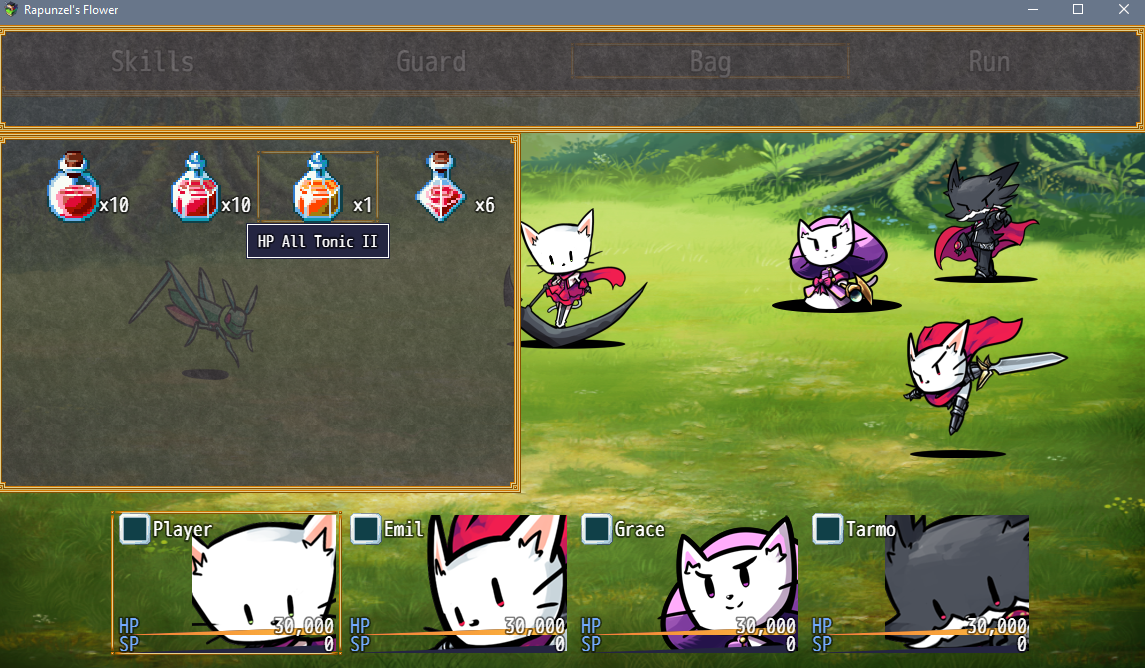 Things look nice and clean though when actual combat starts and I like how the status window now has a clear background, merging more into the battle background. As well as the attacking character moving to the center of the screen: 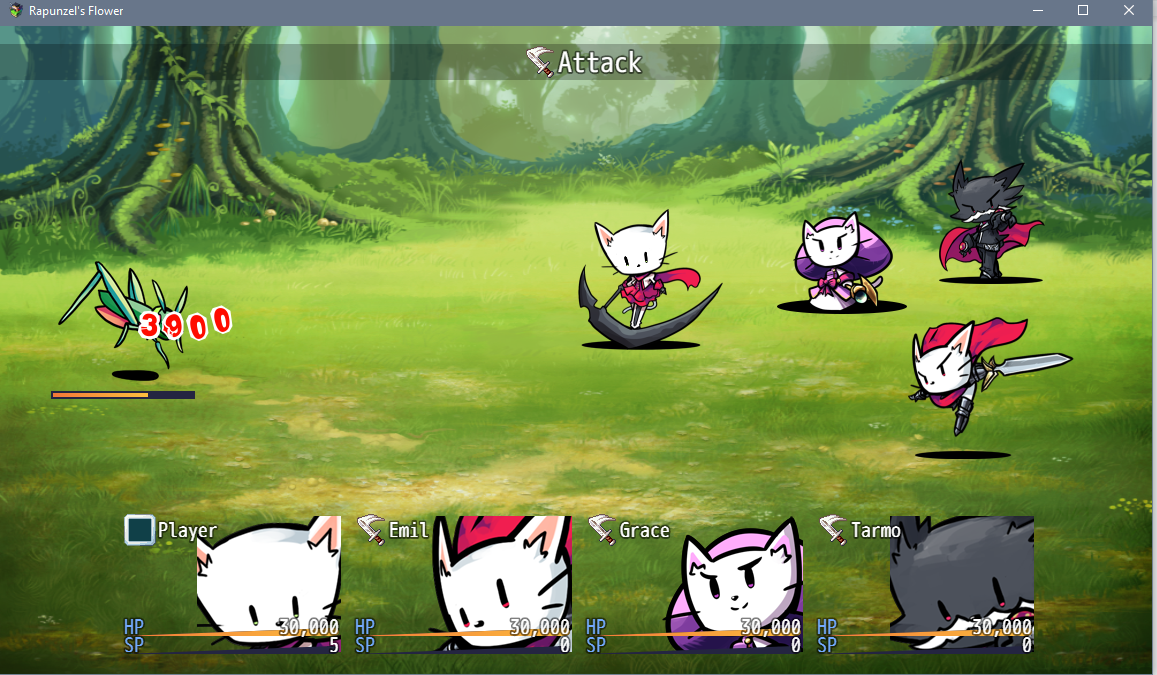 I’m debating if I want to have the enemy also move to the center of the screen or not, but for now I’m really happy where that screen has gone.

I also worked on perfecting the maps. At least with the horizontal scroll I’m trying to get rid of the feeling that you’ve reached the edge of the map by adding margin of map that you can see but not access.

I also realized that there was a lot of unused space on the forest map which I could expand to create little dead-end pockets where I can hide chests, save quest events and the like, making for more to explore and making it feel bigger: 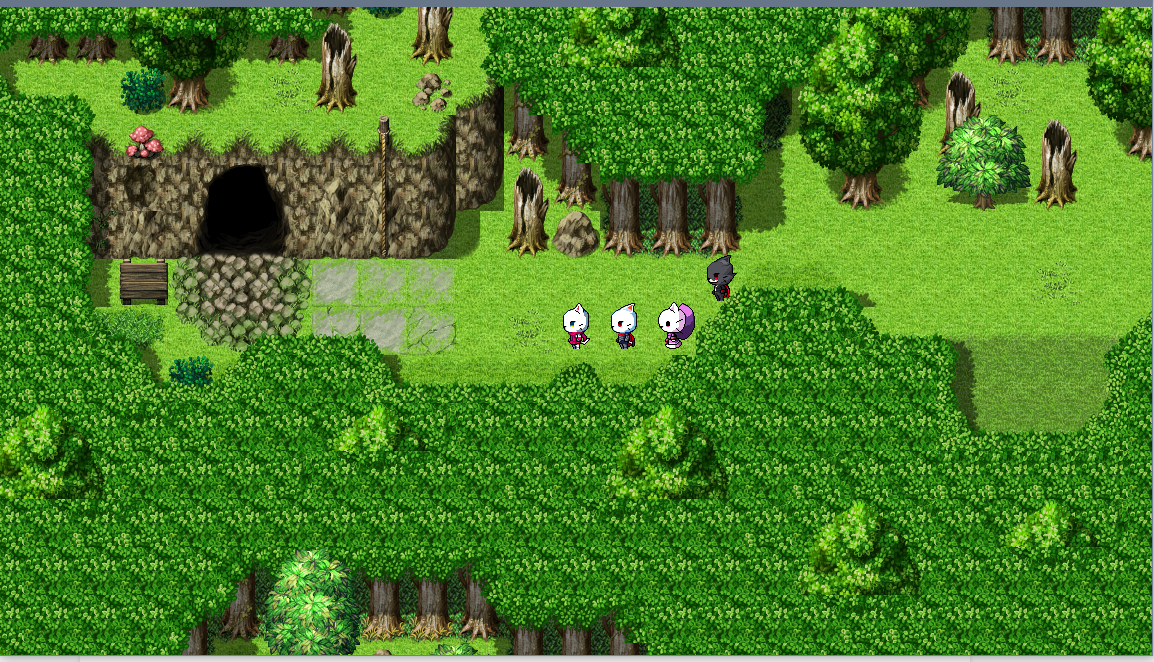 I did this at the Capital map too, so that the edges don’t feel so much like edges: 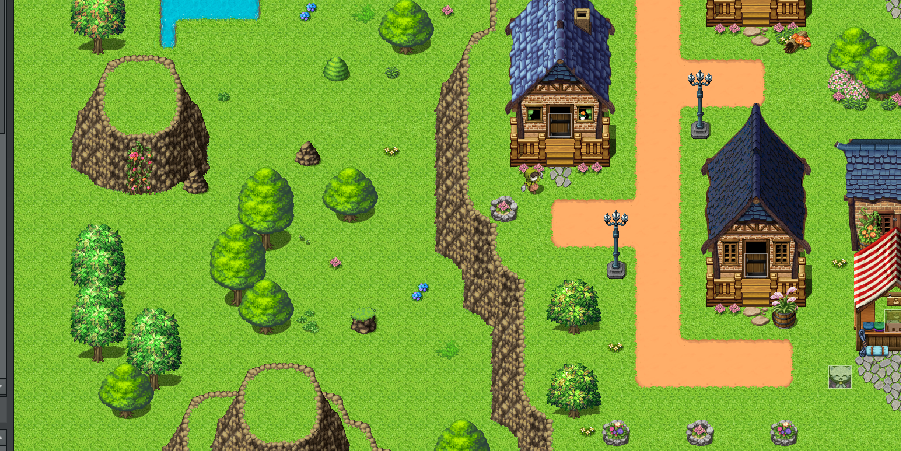 Another big thing I started to do was work on the NPCs. I plan on using Yanfly’s Event Morph, Spawn and Copy events to allow me to have single template for each NPC that I can simply just program an event to morph into, allowing me to not have to change 3 different same events. 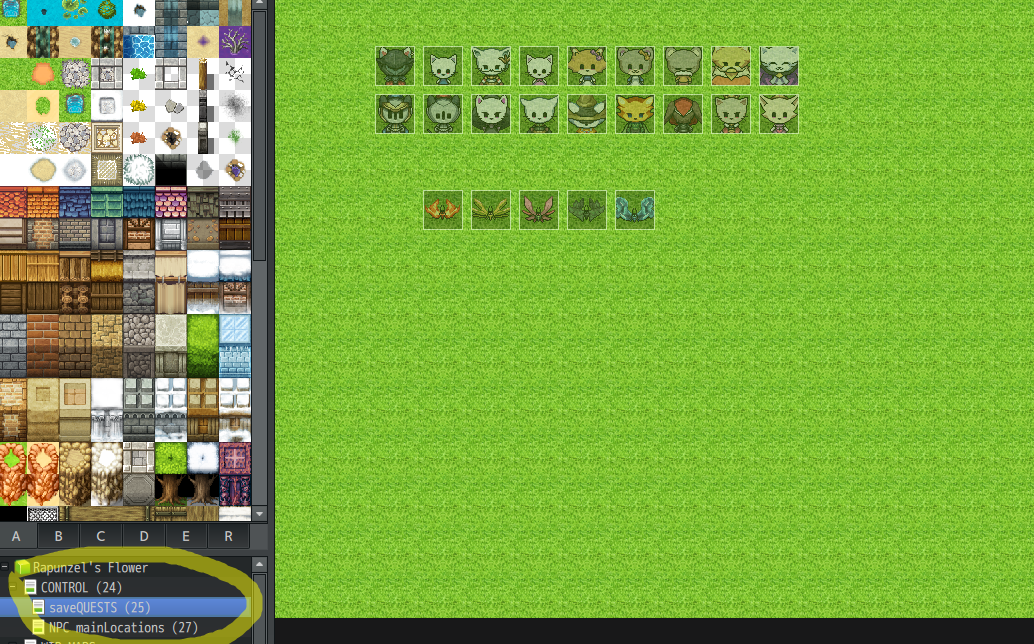 This will allow me to say, have an event on a map have a random chance of turning into an NPC when you walk into that room and that NPC will then work like it would on another map, without having to keep track of two different events for that NPC…does that make sense? 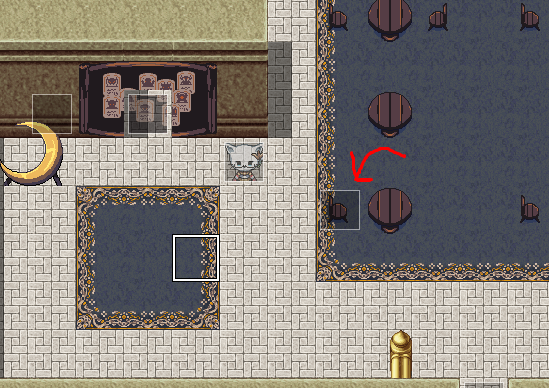 Like this event is programed to randomly change into one of the available NPCs that are kept as templates in the previous screenshot.

There is still a lot of programming left such as their unique flavor texts and responses when you complete a quest for them, but the structure is there: 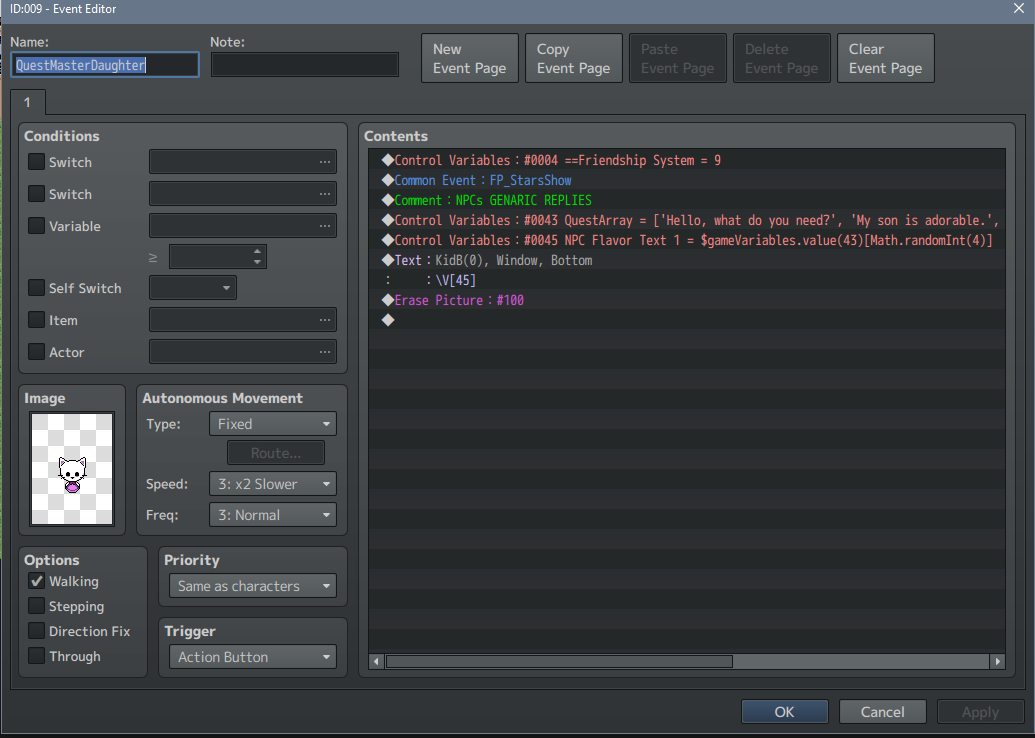 SAVE QUESTS MADE EASIER

For me anyway, I made save quests easier upon completion. Instead of having to go back to the Quest requester to finish the quest, once you find who you were looking for, you’re transported back to the Quest House where you complete the quest with the corresponding NPCs present.

This also saves the player from having to backtrack through the dungeons just to get back to the NPC to collect their reward: 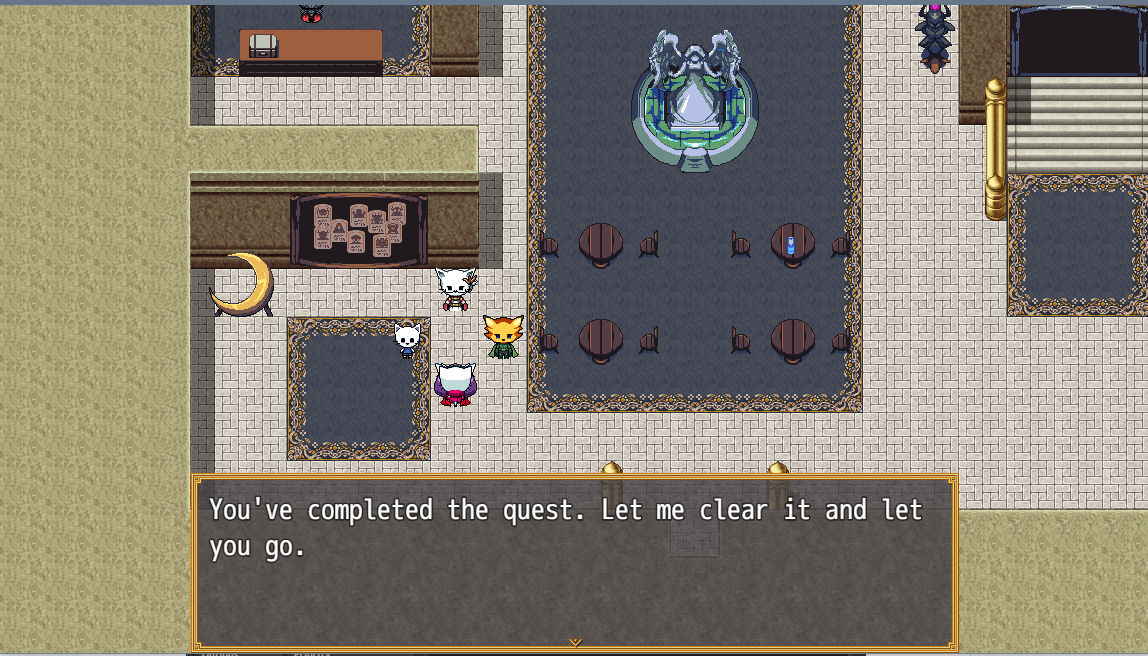 Anywho, thanks for reading and God bless!
Meike Kima