So another type of event template I worked on, which I haven’t actually set up to be a real template with Yanfly’s scripts yet, but it’s practically there, is reoccurring chests.

As this is a dungeon crawler where you have to grind to earn items, I also want their to be some foraging. Especially what I actually want are reappearing treasure chests. I don’t want to have players constantly passing the one chest in the area that they collected way back in the beginning of the game. Instead, I want there to be a chance each time they enter the map that there will be a treasure chest in certain locations. These chests will also have a randomly selected loot so you’re not always getting the same thing. 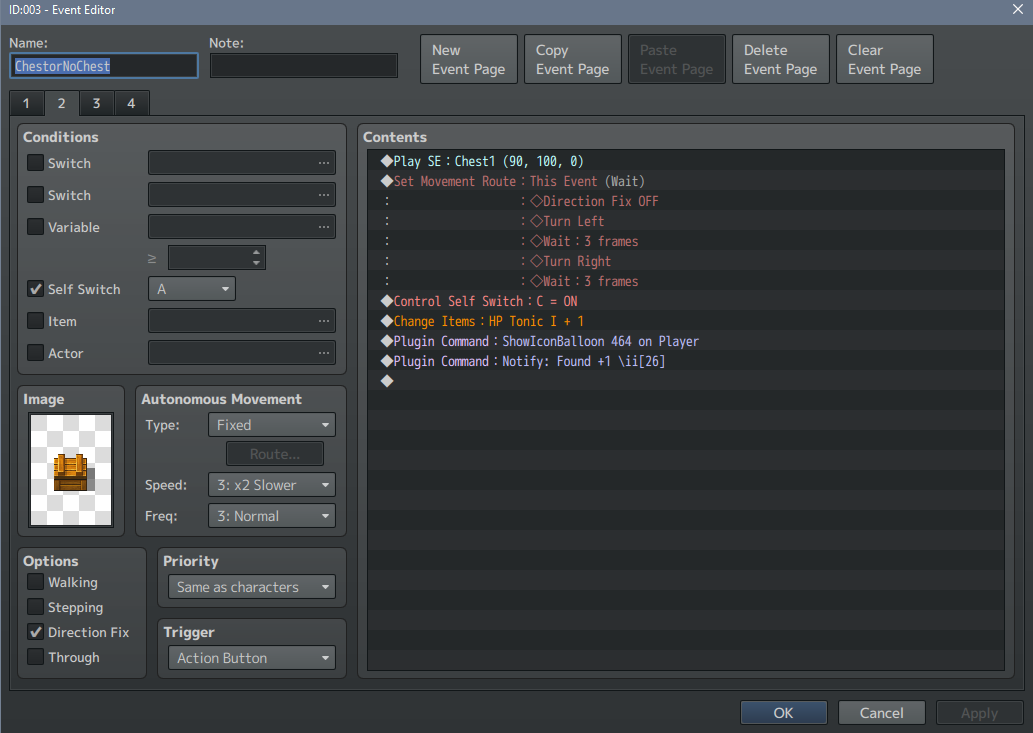 I haven’t gotten to programming the random item portion, but I do have the random appearing chest working, as well as a chance that the random chest will be an open, empty chest.

Yes, I want there to be a chance to have an open, empty chest because the idea of this game is that there are other heroes around running quests and exploring dungeons too, and some may just get to a chest before you do.

I plan to do this with foraging things like mushrooms and plants in areas too, and I’m thinking about how I want to handle ore collecting.

Being the game doesn’t run on a time system, this is all just a random chance of changing an item based on entering the room. Nothing too complicated. Perhaps I’ll include Yanfly’s Spawn event template to make foraging items spawn into random locations like I do in Reel Dream, just not based on a time system, but rather how many un-collected items are still on the map, and then choose if any of those will be despawned and if any new ones will spawn.

Being around the RMMV community for a while I had heard of Terrax Lighting. Everyone seemed to use Terrax Lighting https://forums.rpgmakerweb.com/index.php?threads/terrax-lighting-system.49339/ in their games to add lighting effects.

And I knew I’d have to use it one day, but I wasn’t up for learning something new for the longest time.

Until today. And boy, it’s so much easier to use than I expected! It’s stinkin’ easy!

And so, I was able to create things like this in the cave: 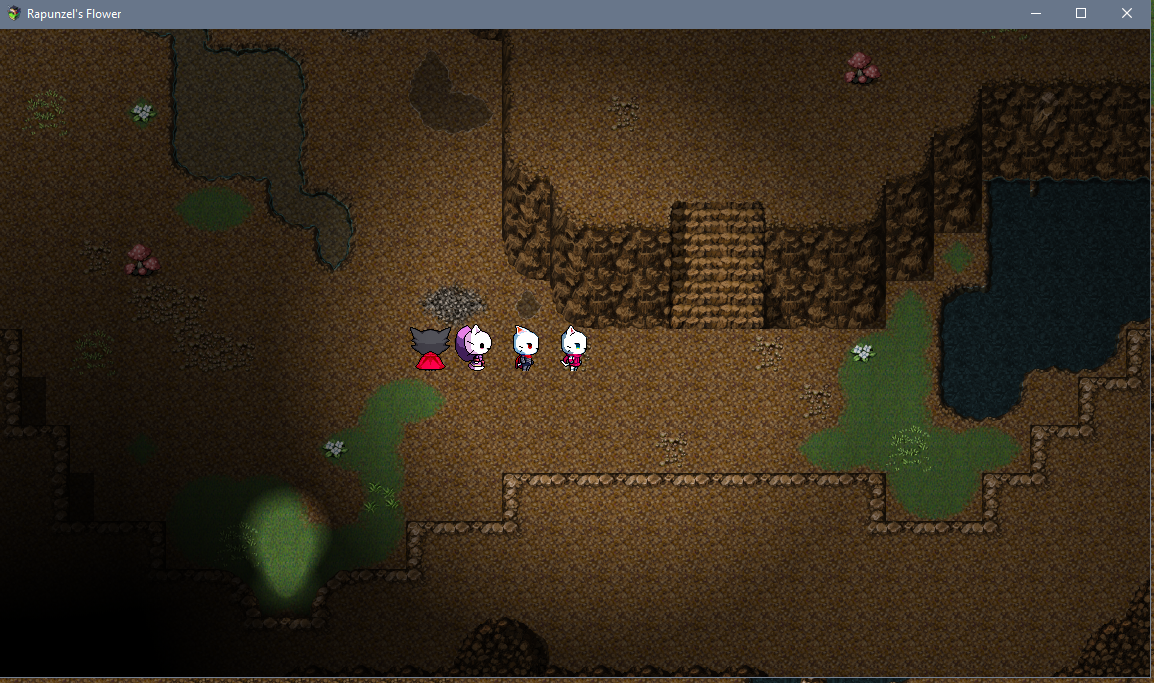 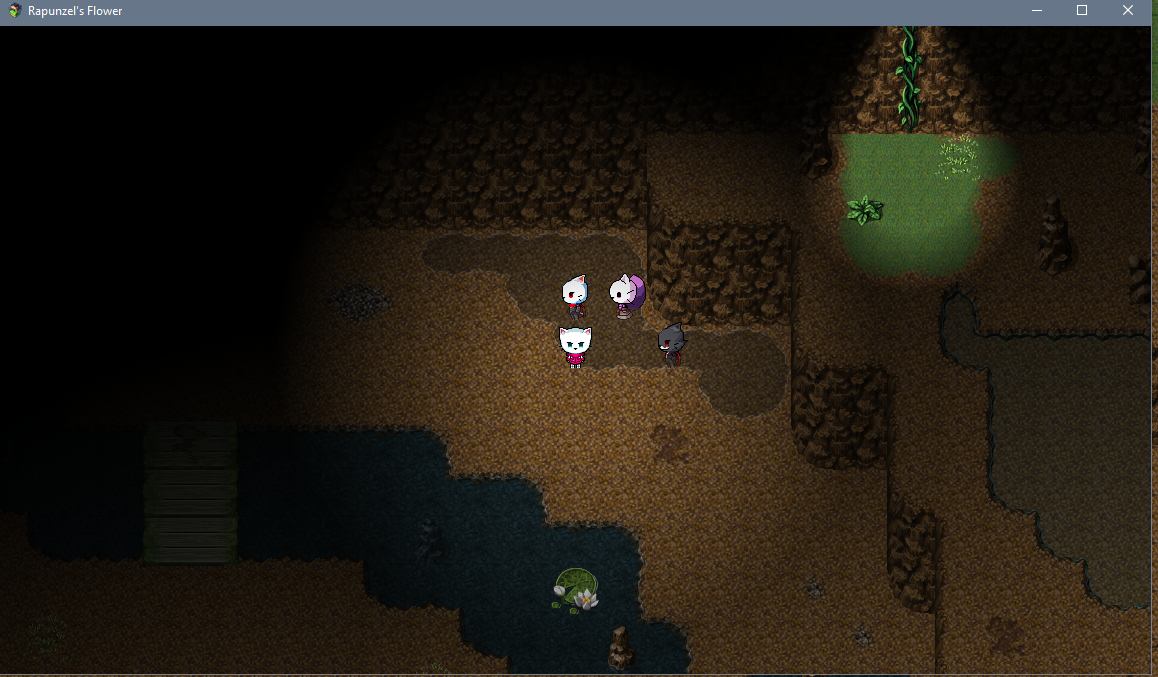 On a slightly different note, I added some light ray effects to the forest, but being they are so simple I tried to keep them from being too distracting so they aren’t overly noticable: 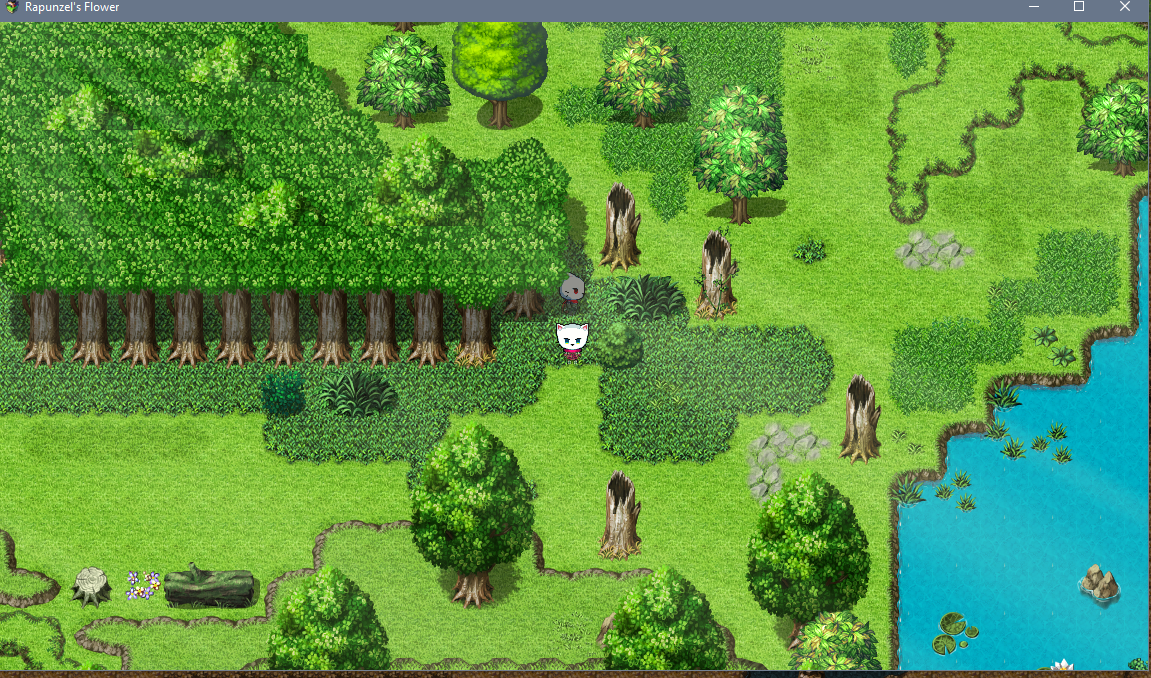 You’ll notice them more when you walk around.

I also worked on adding and fixing up some extra Yanfly plugins for party members’ status pages: 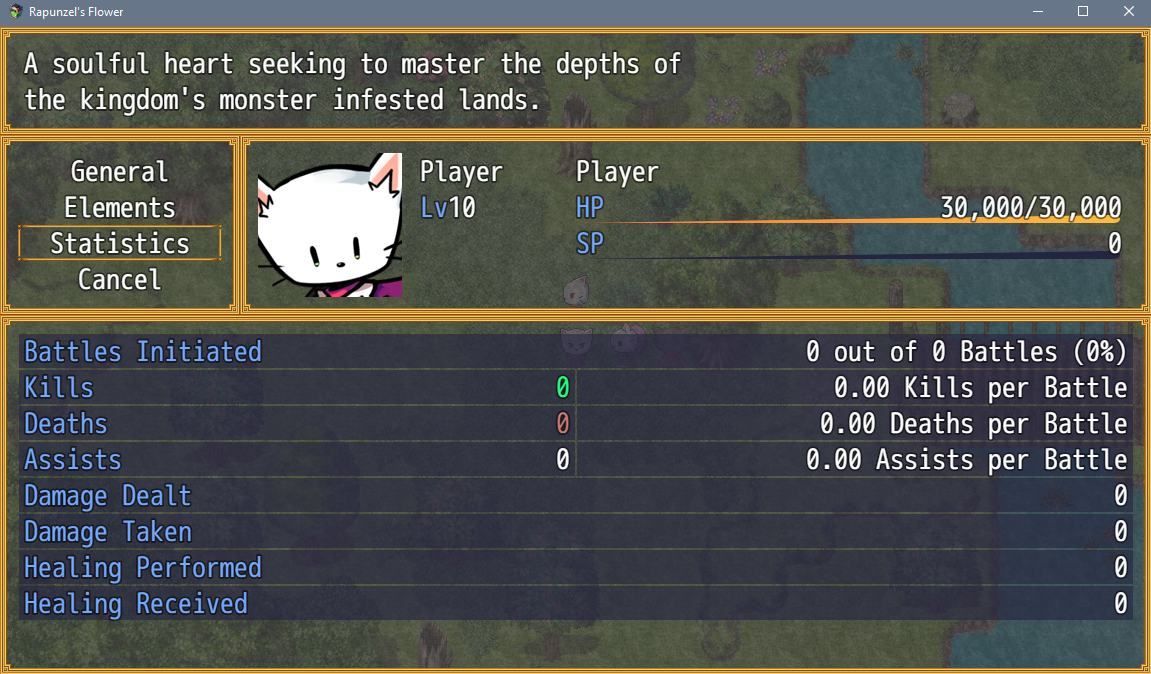 I figured a battle results page would be fun to look at in a dungeon crawler type game.

I also worked on the Elements page, tho I’m not sure if I should show my rather plain ‘Normal’ rate or not, I think that one always stays at 100… 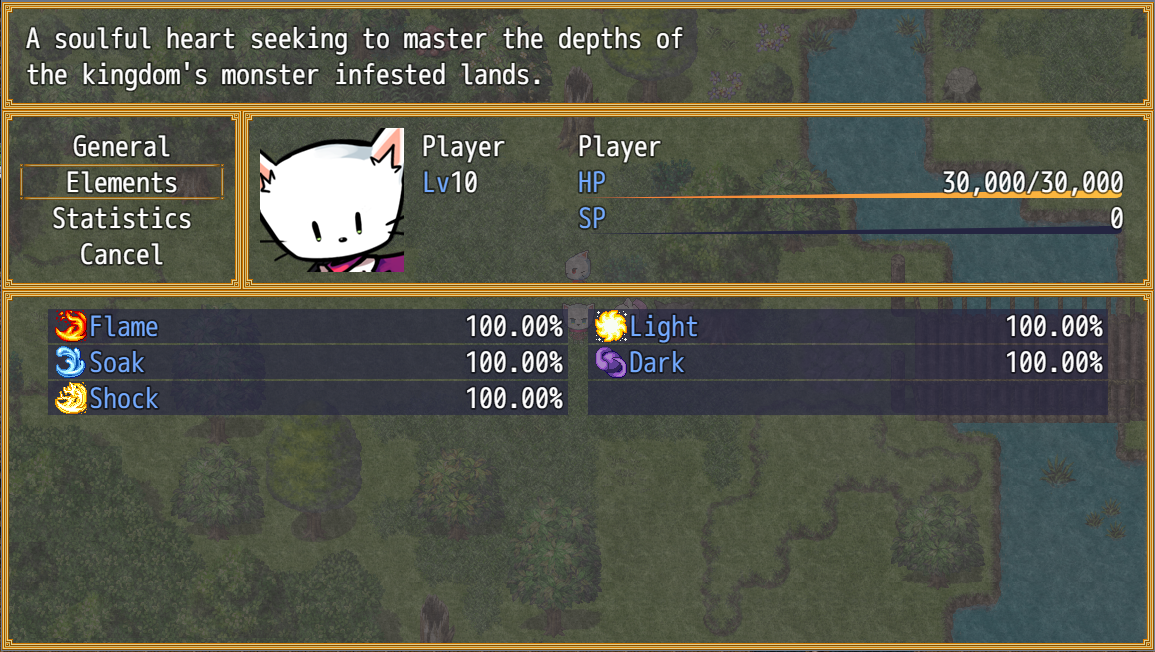 I have a plugin that allows me to use text codes in database fields, so that’s how I got the icons next to the elements.

I actually had to edit my iconset to make my own Shock style icons to match the other elemental icons I had as there were no shock ones.

I’ve actually done a lot of edits with Avery’s sprite sheet, but it’s mostly just been cleaning out icons I don’t need and re-arranging them. Cut out at least over a third, if not half of them. I also reorganized them to fit in their own little category groupings like weapons, armors (which I’m actually having to make my own color variations for), foods, etc.

Despite the slimming down, it’s still a long iconset: 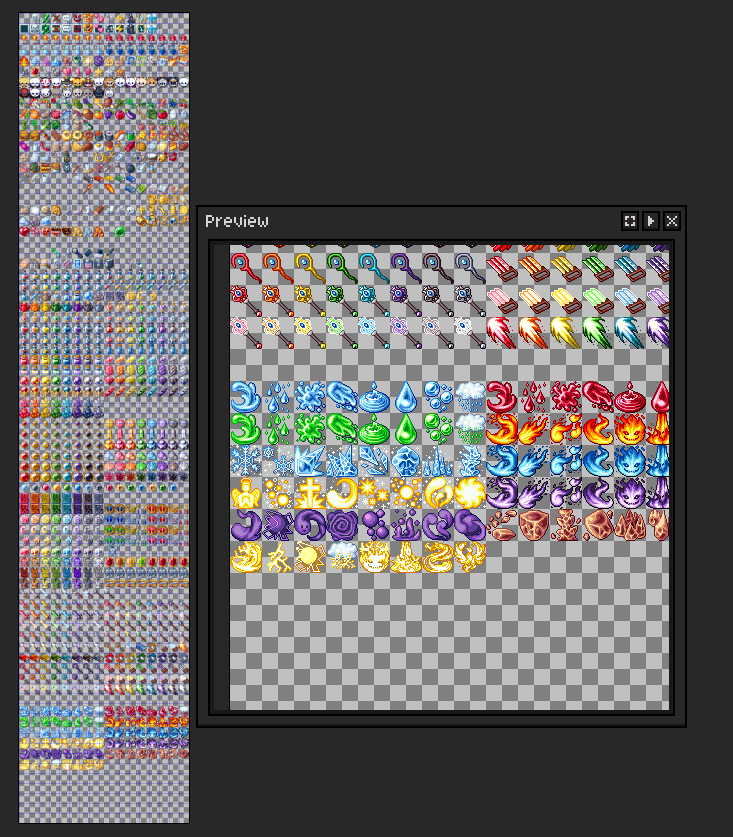 Rearranging the icons did mess up some of my icons for things set by plugins and such (as well as the database but that’s easier to fix) so I do have some bugs showing the wrong icons: 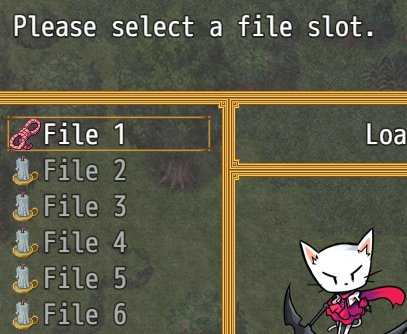 It’s not important enough to me right now to fix right away however.

Thanks for reading and God bless you!
Meike Kima