Originally, to use the Blacksmith crafting you’d have to go to the Blacksmith’s house, and when I added item crafting I wasn’t sure where I would put it. At the Inn? At the Quest Room?

I was also dealing with making the player feel like they were a part of the town by wondering where their character was staying. Originally I was going to give them a room at the Quest House as you are a participant of the Hero Test. However, I felt the Quest House was too far away from the entrance/exits and that the player may be annoyed constantly walking there when there was no incentive for them to be their unless they wanted to do the optional side quests.

Then, I wanted there to be a simple Storage System so that the player didn’t have to carryeverything if they didn’t want to. All these systems were easy and made sense for the gameplay of this lil Dungeon Crawler/Crafting game.

Then I had the idea of having the player choose where their room was. They could have a room at the Inn or they could have a room at the Quest House if they wanted. It would be an easy system to make as the player would just ask an NPC to change their room and a simple Variable change would change the visibility of the crafting/storage items. Very easy to implement with Hime’s Custom Page Conditions I was already using.

It was really easy to implement. You can talk to the Inn Girl, or the Quest Master, and they’ll ask what you want to do, you can then choose a room and with some if statements they will know if you are already renting from them or the other location and offer the available room(s) to you. It’s easy peasy and adds some personalization to the game. 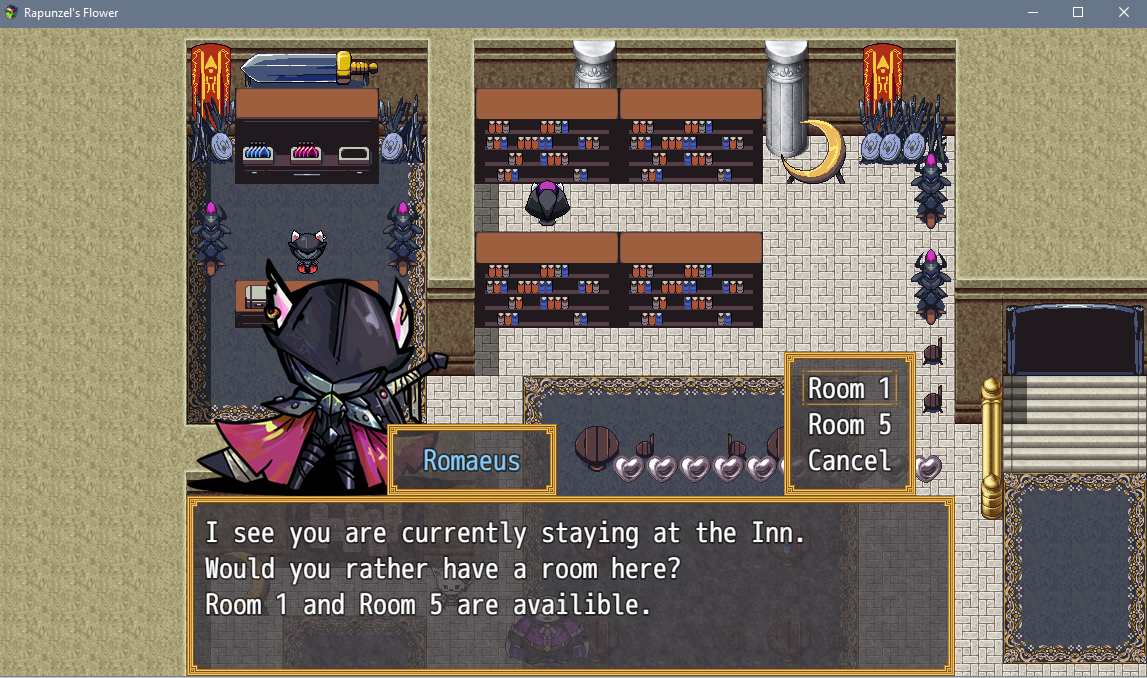 It’s not entirely fancy however, as I’m not going to make say, a furniture rearranging system. Where the storage box/crafting table is, it is in that room. But it allows players to choose how they want to play.

If they want to focus on side quests they can room at the Quest House where you can accept quests on the lower and upper floor.

If they want to only focus on the story and not do sidequests they can room at the Inn and be closer to the map exits.

Things are coming together so well. Which is why this game has definitely surpassed Reel Dream for how far into development it is, but that’s okay, Reel Dream is more of a challenge anywho.

Sorry for the shorter post, but the next part kinda rolls together.