Oct 11, 2019
(this may have been back in October but has pretty much described the last month…hard)

This past week has been hard. Broken water heater, ill mother, bad cold, etc… so if I forgot to mention any of the things I worked on…I’m sorry…

I had been avoiding databasing and figuring out the weapons/skill distribution because well, it’s not my strongest skill when making RPGs, as well as trying to get the typing advantages/disadvantages information out of this document and into a logical little graph to follow was hard and disappointing as I had the information down and then my toddler destroyed those notebook pages and I don’t know where the torn up sheets went.

So I was kinda dreading redoing that information.

So instead I worked on things like background music to the forest and cave areas, and working on random encounters for the forest. 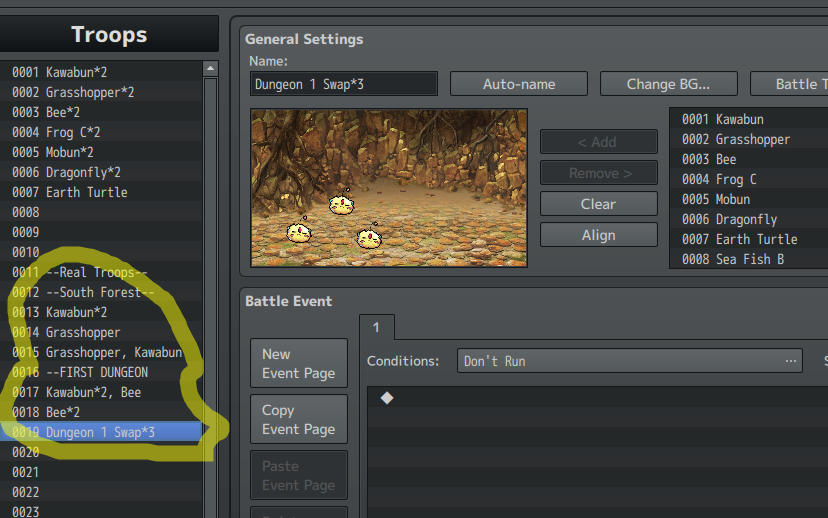 One thing I decided I would do was to use Yanfly’s Swap Enemies to create random troops for the areas, so those three monsters are actually just swap monsters which will change to either a kawabun or grasshopper (or bee? Or something…can’t remember what I set this first one to) Eitherway, I’ll probably have one or two swap troops for an area as well as troops I’ll set up to work together, as I hope to take advantage of YEP’s Enemy AI as well.

Just not right now. We’re not at the point of being able to set up AI yet.

Then, I finally bit the bullet and started to work on those typings and databasing, this time getting my needed information into the auto-saving Google Sheets: 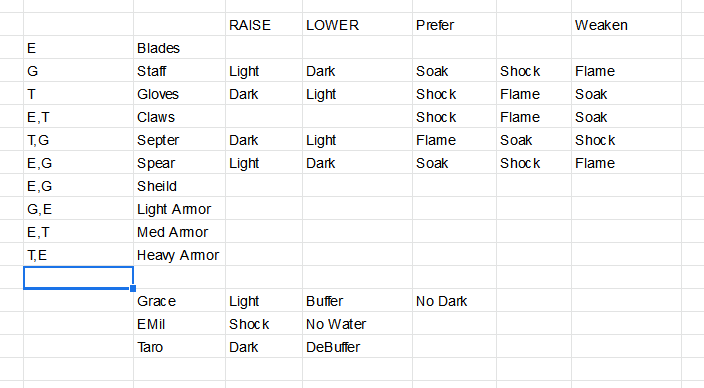 As you can see I have each weapon type in a graph showing what it Raises/Lowers, what elements it prefers and which it weakens.

Now, each weapon in a category won’t necessarily follow each rule. All Staffs won’t weaken Dark,  and their might be one Flame staff, but for the most part, those are the rules Staffs follow.

To figure out what the weapons did, I considered how my party members would act and what weapons they use, so as you see in the bottom each party member is listed with what their specialties tend to be, and that lines up with the majority of weapons they can equip.

Using that graph I was able to start building the skeletons of the final weapons. First I just went through and numbered each weapon, putting an abbreviation for what typing I figured it could have. I also left the last one to be an ‘Ultra’ weapon, which would be the most powerful in the group, but I’m not sure exactly what that would mean. 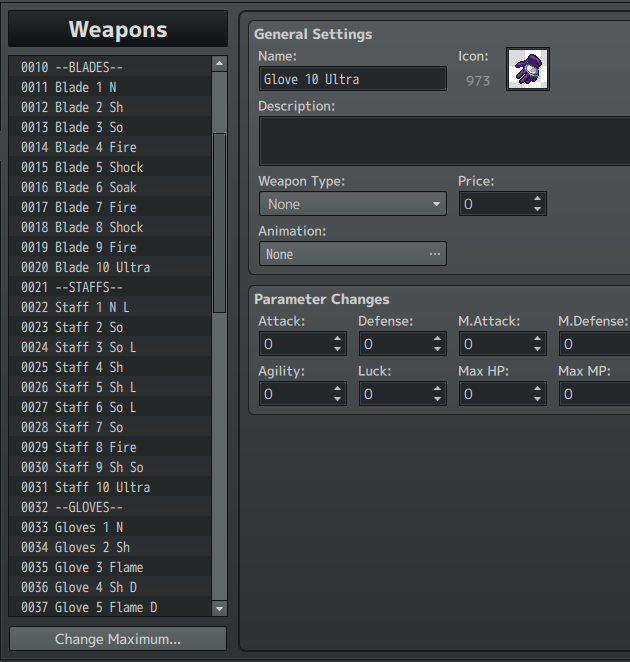 Databasing…such a big part of making an RPGMaker game and yet so tedious….