So there is a plugin I like that can sort items and skill lists by alphabetical order, I really like this because I don’t like how RPGMaker does it normally, which is to just list it as it is listed in the Database.

Because there is no set order in the Database. As hard as I try, there are always items created at the end of the list that I didn’t think of before.

And so, that’s why I like the Alphabetical order plugin I use (Hopefully I’ll get the time to give you a link later)

So I really wanted this in the Beastbook as well, as those have no real rhyme or reason either, no matter how hard I try I know I’m going to be adding more to the enemy list. So I went to edit the alphabetical order plugin and just ended up dissecting how it worked and adding the appropriate code into the beast book plugin. And ta-da! 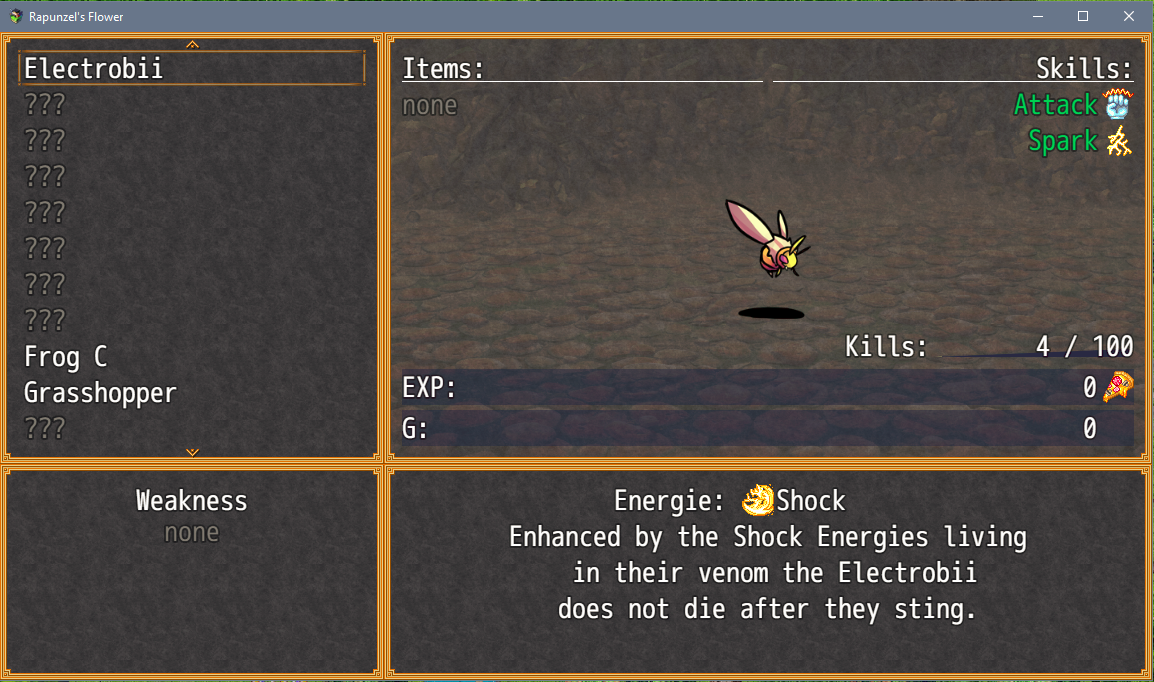 Ignore the pizza slice…I haven’t changed the icons of a lot of things since rearranging the iconsheet.

So, a while ago while expanding the South Forest Map I added a new little cave area, thinking it would be a place that adventurers took refuge in because there were no monsters that would attack them, and I would put some sort of little NPC events or foraging items in the cave to make players want to come back to it 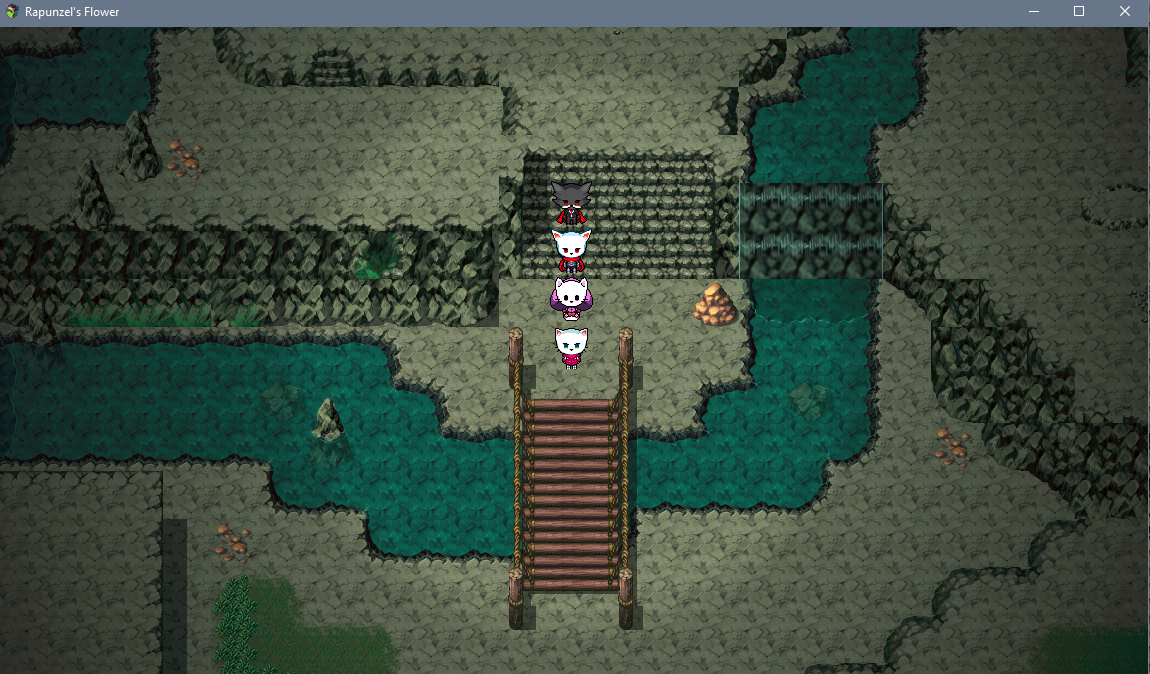 In the end I ended up with a small cave that I put crafting ore/shard rocks for foraging, long story short, I ended up making a spawning event control when they spawned as I could figure out an easier way to make the objects reset when I came onto the map each time. Honestly, the spawning event does give me more control if needed.

Here’s a cool thing about the foraging rocks: there’s a chance they may just give you the item (which who knows you may collect tools later that give you a better chance at collecting better ore) or, creating some game lore, you may have to battle a mimic-like Energie hive/host that will drop better ore/shards/gems then if it was a basic foraging object: 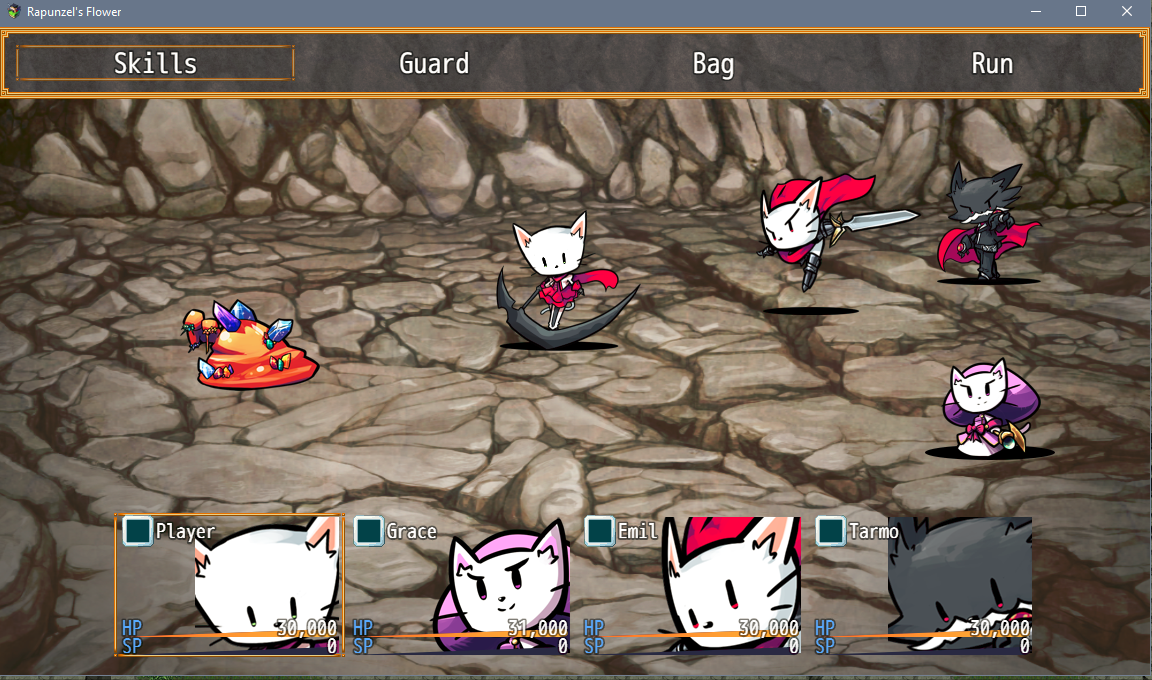 Anyway, all this made me plan for more spawning type events and organizing my maps as such, and just generally reorganizing the maps: 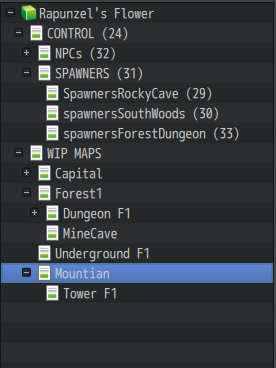 I should probably see about renaming some to official names…that I haven’t really thought of yet.

I’m getting to the point as well that I really have to get back to working on the weapons/skills so that I can get to the crafting system. Things are coming together to where I could set up most the game. It may be unbalanced, but it’s getting there. Perhaps I’ll polish the first part and release a demo of sorts? Don’t expect that anytime soon.

Thanks so much for keeping up with me and God bless,
Meike Kima